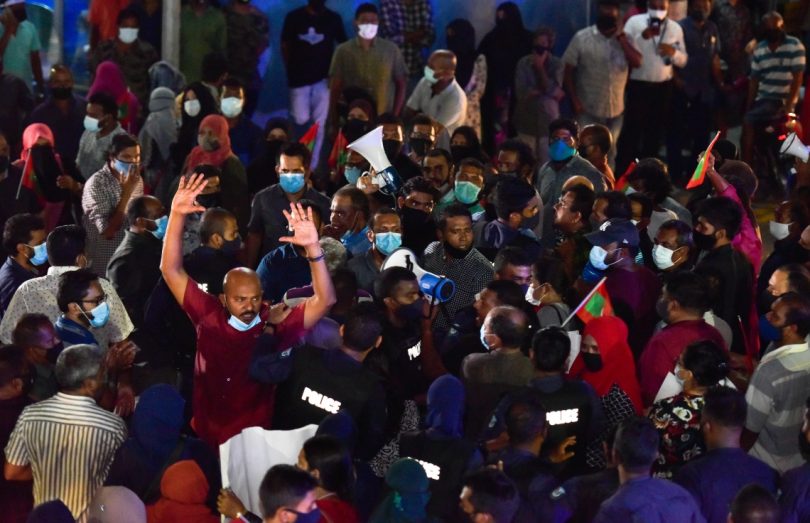 The opposition coalition declared late Monday that they would not proceed with protests due to the recent upsurge in the number of COVID-19 cases in the Maldives.

The alliance of Progressive Party of Maldives (PPM) and People’s National Congress (PNC) held a series of protests in late July, calling for the release of convicted former President Abdulla Yameen Abdul Gayoom and the resignation of incumbent President Ibrahim Mohamed Solih.

Although the protests were halted for the Independence Day and Eid al-Adha holidays, the coalition had previously stated that they would resume the gatherings afterwards.

However, speaking on a television programme aired on local channel SanguTV, PNC’s Vice President Ibrahim Sujau disclosed that the opposition has decided against holding protests for the protection of public health, due to the increasing number of COVID-19 cases in the country.

He reiterated that the opposition’s motto was “nation first”.

However, Sujau stated that the coalition would not hesitate to hold the government accountable over unfulfilled pledges, despite the lack of gatherings.

PPM/PNC’s demonstrations in July resulted in clashes and various arrests, while the opposition also faced criticism over lack of physical distancing and several protestors not wearing face masks as per the Health Protection Agency (HPA)’s COVID-19 safety guidelines.

While HPA has urged against gatherings of more than 30 people in a given place, the Ministry of Home Affairs on July 14 decided to prohibit all public gatherings held across the Greater Male’ Region without prior written approval by Maldives Police Service, with the exception of the carnival area in Male’.

This decision, which was made under the contentious amendment to the Peaceful Assembly Act 2013 ratified during former President Abdulla Yameen Abdul Gayoom’s administration, has been condemned as a violation of fundamental rights by several local activists, rights groups and the international NGO Human Rights Watch.