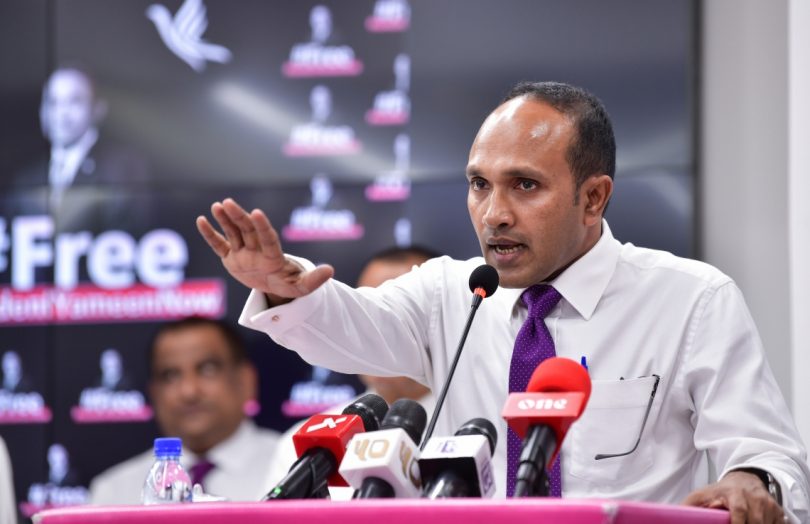 Ex-VP Jameel was given the post in a special event held to commemorate his second time joining PPM as a party member.

On Monday this week, the opposition also appointed former President Dr Mohamed Waheed as a special advisor to the PPM/PNC coalition.

Jameel was previously on the frontlines of Jumhooree Party (JP), a member of the governing coalition.

He resigned from JP in February, stating that there seemed a little opportunity for him to carry out his vision for the Maldives with the party’s current political ideology, considering the changes in the country’s political landscape.

Speaking to the press following his reinstatement to PPM, Jameel insisted that former President Abdulla Yameen Abdul Gayoom’s imprisonment was unacceptable, considering that he is the “face of development” in the Maldives.

Yameen is currently serving a five-year prison sentence after Criminal Court convicted him of money laundering in relation to the Maldives Marketing and Public Relations Corporation (MMPRC) corruption scandal.

However, Jameel stated that Yameen is being punished as a political prisoner, adding that many who carried MMPRC’s embezzled funds in bags are sitting at the comfort of their homes.

Jameel called for the opposition to rise up in the fight to free President Yameen and support him as the opposition candidate for 2023’s presidential elections.

Listing the achievements of Yameen’s administration, Jameel described PPM as a party that prioritise businesses, and aid the expansion of the economy.

Jameel was the first vice president in the previous PPM administration, under the presidency of Abdulla Yameen Abdul Gayoom.

He was impeached by the parliament in 2015, prior to which he went into exile, living in the United Kingdom before he returned in October 2018 in the wake of incumbent President Ibrahim Mohamed Solih’s landslide win in the presidential elections.

Following his impeachment, Dr Jameel was highly critical of the former PPM government, describing it as the darkest era in the history of the Maldives, rampant with corruption and strife. He also accused that then-President Yameen should directly bear responsibility for the corruption scandal of Maldives Marketing and Public Relations Corporation (MMPRC), which saw the embezzlement of MVR 3.3 billion in state funds.

However, Dr Jameel currently maintains that the present government is more debilitating to the country. He stated that he was willing to set aside the injustice and grievances done to him and work alongside Yameen once more, as he has always prioritised the nation above all else in his political life.