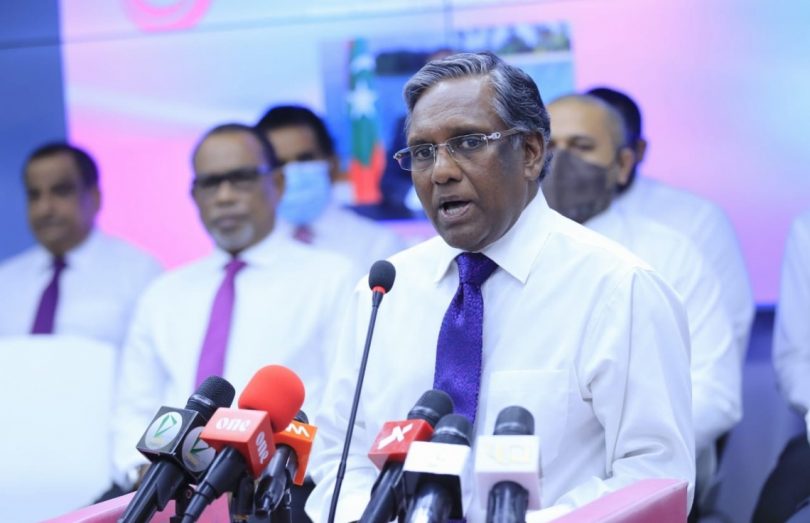 The appointment was announced by the Interim President of PNC Abdul Raheem Abdulla at a press conference held at the main opposition’s head office.

Waheed described the appointment as a “tremendous honour” and stated that he wanted to assume a more active role in serving the country.

The former president noted that Abdul Raheem Abdulla approached him with the request to fill the position of coalition advisor and Waheed rose to the occasion.

He also encouraged other veterans in the opposition coalition to take more active roles in PPM and PNC.

In addition, Waheed criticized former President Abdulla Yameen Abdul Gayoom’s imprisonment as an unjust decision and stressed on the need to ensure justice for his successor, devoid of any political bias.

Expressing concern over the current status of the country, Waheed declared that his vision was for the Maldives to have strong political parties, and for the PPM/PNC coalition to be an influential political movement that holds the government accountable and works closely with the common people to strengthen the relations between the party and the public.

Warning of the difficult challenges ahead, Waheed concluded his speech calling for unity and support in these unprecedented times.

Answering a question posed by a journalist, Waheed stated that he was currently not entertaining any thoughts of running for president in the opposition parties, adding that coalition was comprised of democratic parties and that their leaders will be elected by vote.

Abdul Raheem Abdulla reiterated his gratitude towards Waheed and highlighted that having the ex-president at the frontlines of the coalition will strengthen the opposition’s activities. He reiterated that the opposition will continue its efforts to free former President Yameen.

Waheed was vice president to former President Mohamed Nasheed, assuming office after Nasheed’s controversial resignation on February 7, 2012. He was known to have close relations with his successor Yameen and PPM and served as president until the 2013 presidential election with their support.