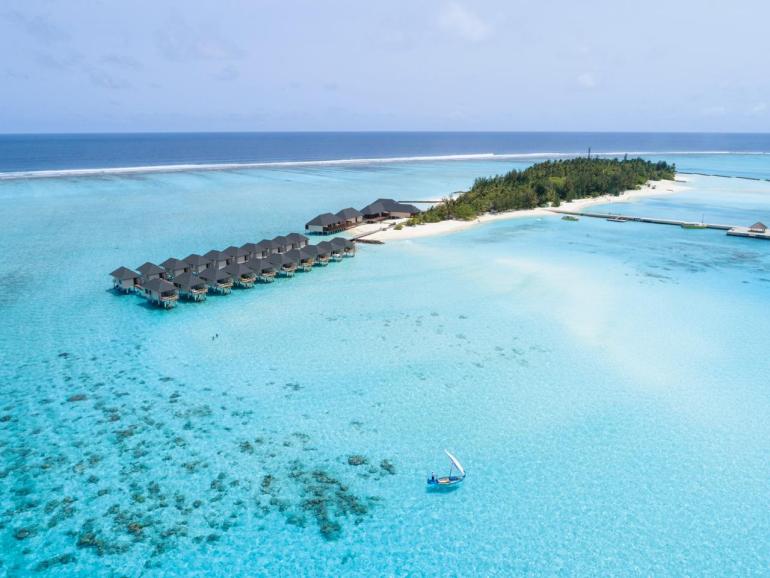 At Amillafushi in Baa Atoll, guests are required to undergo a second COVID-19 test on arrival, so they can enjoy a mask-free holiday [Courtesy of Amillafushi]

Even as they gradually began tiptoeing out of months-long lockdowns earlier this year, many countries feared travellers might fuel new COVID-19 outbreaks and opted to keep border restrictions in place.

China set tight controls, barring all foreign arrivals and nearly all departures. Thailand and Australia hinted their borders could remain closed until the end of the year. Tunisia and Kenya said most arrivals would need to present proof of negative tests for entry, while France and Spain warned the United Kingdom of tit-for-tat quarantine measures.

One tiny country, however, decided to take a different path.

On July 15, the Indian Ocean archipelago of Maldives threw open its borders to everyone.

Visitors would not need negative results for entry, the tourism-dependent island nation declared, and would not be subject to quarantine measures of any kind – a policy some in the tourism sector called “courageous” and also “a little bit crazy”.

“The Maldives needs tourism,” Abdulla Mausoom, an industry veteran who was appointed the Maldives’ tourism minister in mid-August, told Al Jazeera. “When tourism stops, everything stops. We have no choice but to carry on.”

Famed for their pristine beaches and turquoise waters, the Maldives’ 1,192 coral islands are scattered in ring-like chains across the equator, while the country’s 156 upmarket resorts, which make up the backbone of the tourism sector, are located on private islands.

The Maldives comprises of 1,192 coral islands and resorts such as this one – Summer Island – are located on private islands [Courtesy of Summer Island Maldives]This exclusivity, according to Mausoom, is a major advantage.

“We are confident we can ensure the safety of our guests – because our geography enables us to do it,” he said. “You just land at the airport and you will be picked up by dedicated transport for your particular resort and you enjoy a very private and a very safe stay. There’s no place safer.”

To prepare for the new arrivals, the government built intensive care units and scaled up testing facilities in several regions.

For their part, the resorts established unprecedented safety and hygiene measures. Some even conducted PCR tests for their guests on arrival, until the government – alarmed by minor outbreaks on a few resorts – made a U-turn in August and said that visitors would need to have a negative test taken within 72 hours before they would be allowed in.

On September 15, the World Travel and Tourism Council certified the Maldives – a country of 450,000 people that has so far recorded more than 10,000 cases but only 34 deaths, among the lowest mortality rates for COVID-19 in the world – a safe destination.

Even so, some islands continued to conduct tests for their guests on arrival.

“We are doing everything possible to keep our property COVID-free,” said Jason Kruse, manager of the resort at Amillafushi in Baa Atoll. “Once our guests get a negative result on the second test, they can roam around the island mask-free.”

In North Male atoll, resorts such as Summer Island went completely paperless, relying on digital tools for check-in and access to restaurant menus, while nearby Coco Bodu Hithi announced daily temperature screenings of guests and said it would leave its villas vacant for 24 hours before allowing new guests to check-in. 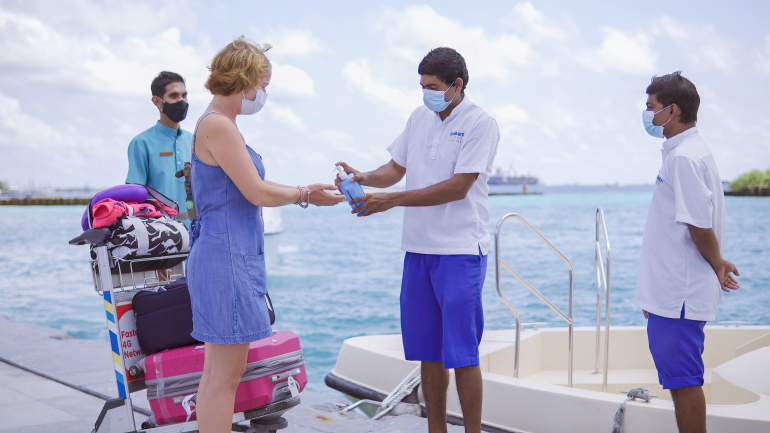 Summer Island says enhanced COVID-19 safety measures mean guests have ‘a more private and exclusive’ experience than they did prior to the pandemic [Courtesy of Summer Island]“These measures do have an impact on our operations and guest experience,” said Mariya Shareef, manager at Summer Island. “For example, we are unable to accommodate as many guests as we’d like on our property due to social distancing measures … We have discontinued group entertainment and excursions, and instead offer private events and excursions to avoid groups.”

But, she added, “this also means that the guest experience is more private and exclusive than before.”

So, with the open border and enhanced safety measures, how is the Maldives doing?

Not too well, if official figures of arrivals are anything to go by.

Three months on, just 18,596 people have visited the country – a fraction of the pre-pandemic average of 141,000 tourists a month.

The plunge in arrivals has devastated the Maldives’ economy, halving government revenue, throwing thousands of people out of work and putting pressure on the value of the Maldivian rufiyaa. Tourism accounts for more than two-thirds of the Maldives’ GDP and the World Bank estimates its economy could shrink by nearly 9 percent this year. Already, the government has turned to its powerful neighbour, India, for financial aid, obtaining $250m in budget support.

Against the bleak economic backdrop, some have expressed fears about food security in an island nation that imports more than 90 percent of its food.

The issue, according to Mausoom, was that even though the Maldives was open for business, many governments across the world remained reluctant to let their citizens travel.

“Restrictions on travel is the main challenge,” the minister said. “For arrivals to increase, we need more airlines to come in.”

Already, he noted, Emirates, Qatar Airways, Etihad, Aeroflot, Sri Lankan and Turkish Airlines have started weekly scheduled flights. But demand has remained low because of restrictions, such as mandatory quarantines on return, as well as severe economic downturns in major source markets, including Europe.

The United Nations World Tourism Organization, in a September report, said global air passenger demand dropped 67 percent in the first half of the year, while current trends point to a decline in international arrivals closer to 70 percent for the whole of 2020.

Travel advisories from the United States and European countries – warning against non-essential travel to the Maldives – have not helped either.

The US’s warning came in August amid an outbreak in the capital, Male, a city of about 150,000 people, where, for most of August and September, health authorities were recording more than 100 infections a day.

Government officials stress that Male is on an island separate from the main airport and that its residents are under a travel ban, but hotel executives told Al Jazeera that major travel agencies in Europe were reluctant to send tourists to the Maldives as long as the advisories remained in place.

“We’ve had lots of bookings, but agencies are pushing back or cancelling these reservations because the travel advisories mean that insurance companies will not cover expenses in case of illness,” said one marketing executive, requesting anonymity.

Mausoom, the tourism minister, said he was lobbying foreign governments and was hopeful of a change in advisories, especially as confirmed cases in the capital now appear to be on the decline. In addition, he said, the government was in discussion with local companies to introduce COVID-19 specific insurance policies for tourists.

The government was also holding talks with important markets to set up “leisure bubbles”, he said, where travellers returning to their home countries would be exempt from quarantine requirements.

“We are in active dialogue with Singapore, and it has advanced to the level that we are ready to start the Maldives-Singapore leisure travel bubble,” Mausoom said. “This model is designed for a ‘total green lane’ – with minimal contact and higher safety standards.”

With all the countermeasures, the minister said he was optimistic about 2021.

“We expect arrivals to increase gradually, and we are confident that 2021 will be a year to celebrate,” he said.

Others, however, do not share the optimism, with many in the tourism sector saying they were bracing for “tough” years ahead.

The vast majority of resorts have laid off their staff or placed them on reduced salaries, with the Tourism Employees Association of Maldives (TEAM) estimating that nearly half of the 45,000 people directly employed by the resorts have been affected since the start of the pandemic.

“The situation hasn’t gotten better with the reopening,” said Mauroof Zaki, secretary-general of TEAM. “That’s because none of the resorts are fully manned. Since July, people who were on reduced pay were moved to no pay, because the hotels do not need as much staff, and many more were laid off.”

Among them is Mohamed Rasheed, a 31-year-old father of two, who was sacked along with nearly a third of JA Manafaru’s more than 300 staff in September.

“That’s 86 families we are talking about here,” said Rasheed, who lives in northern Haa Dhaal atoll, a remote area home to just two resorts. “I applied for the government’s income support. But that’s not enough to survive … and there are no other jobs here.”

One resort manager, asking for anonymity, said: “It’s going to be rough for at least the next two years. We are not going to make enough to cover operational costs but we are trying to revive business.”

Another executive at a Maldivian-owned resort, which did not reduce salaries for the duration of the lockdown, said the outlook remained “grim”.

“We opened our hotels to keep our staff busy and to keep operations running,” he said. But with the lower than expected arrivals, the company had to furlough staff or reduce salaries starting from September.

“If things do not improve by January, we will have to shut the hotels down and reopen in November of next year,” he said. “We will know in a couple of weeks.”