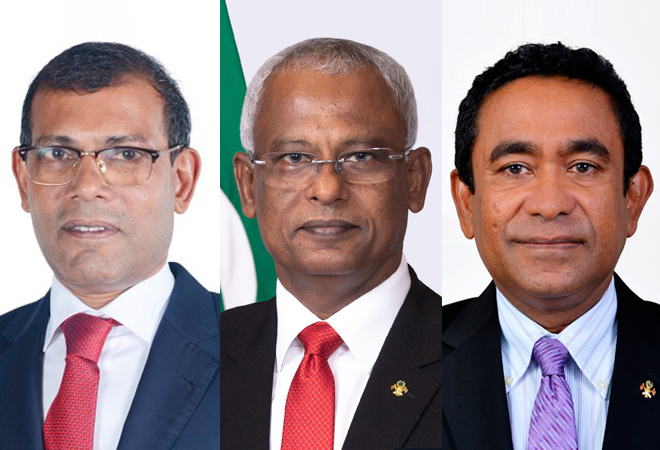 Coupled with his over-enthusiasm for India, Maldives Parliament Speaker Mohammed ‘Anni’ Nasheed’s criticism of his own MDP Ministers hurt bilateral ties as much as jailed former President Abdulla Yameen’s PPM-PNC combine’s ‘India out’ campaign. Both can weaken MDP President Ibrahim ‘Ibu’ Solih’s leadership, the former, unintended – and bilateral ties, too.

Solih was Nasheed’s personal choice when a pending jail-term and ‘self-exile’ in the UK prevented him from contesting the 2018 presidential polls.  So, Nasheed’s turning his traditional anti-graft guns against two of his party ministers, namely, Ibrahim Ameer (Finance) – and by extension, Fayyaz Ismail (Economic Development) — apart from the nation’s Anti-Corruption Commission (ACC), has caused eyebrows to raise, both within his Maldivian Democratic Party (MDP) and outside.

Nasheed has alleged corruption in the Finance and Economic Development Ministries over a tender to set up a single-window e-platform for foreign trade, According to the Sun Online news portal, Nasheed had told the MDP national council WhatsApp group, how the ACC, one of the constitutionally-mandated Independent checks-and-balances institutions created under the Third Republican Constitution of 2008, had created the pre-allotment complaints lightly.

Denying ‘systemic corruption’, as alleged, Finance Minister Ameer in tit-for-tat tweet-exchanges with Nasheed, asked: “Amid this internal rivalry, aren’t we calling each other thieves and destroying ourselves?” The Ministry explained it away as a ‘minor oversight’. However, the Economic Development Ministry has since acknowledged that the ADB has halted the $ 6.7-m project after claiming otherwise, earlier.

As party boss and main vote-catcher, Nasheed is entitled to take it up personally/organisationally with the ministers concerned and President Solih, too, without going to town. MDP insiders are concerned if it reflected any kind of serious differences between the ‘Big Two’. Political rivals now demanding Yameen’s freedom, camouflaging it in anti-India, ‘nationalist’ colours, could not but use Nasheed’s charges against his own party. Dating back, they could question Nasheed, too, for his choice of Solih for the presidency.

Insiders are concerned about Nasheed’s timing even more, given the Opposition campaign, and the Government’s inability to measure up in Covid management, where bigger countries with better resources have failed worse. Unchecked, such criticism from within can lead to non-cooperation from the bureaucracy, reverse tourism-sector revival, rock investor-confidence, that too when the Government has an acknowledged debt of MVR 74 m, and has decided to float bonds worth MVR 935 m, including sales to State Bank of India.

Internal trouble for the MDP and the Solih presidency has come up at a time when the Opposition combine has launched an ‘India out’ campaign, as a ruse for demanding Yamen’s freedom. The High Court has reserved verdict on his appeal against three-year prison-term and $ 5 m fine in a money-laundering case when in power. For inexplicable reasons at the closing hearing on his appeal, Yameen declined to divulge the source of the $ 1 m, which he claimed was election funds. Jailed and impeached Vice-President, Ahmed Adeeb, one of the two persons Yameen said had received the donation on his behalf has denied it.

In the light of the ‘India out’ campaign, Ali Azim, MDP parliamentary group leader, has accused China of secretly funding the Opposition to stir up the Maldivian political arena. In a return-tweet, Chinese Ambassador Zhang Lizhong denied the charge and said that Beijing followed a ‘no-interference’ policy in the domestic affairs of bilateral partner – and will not change its policy because someone may be trying to drag them into political games between local parties. The MDP is also planning to launch a counter-campaign against Yameen’s.

The Yameen campaign hopes to create public sympathy for his contested personal cause. In the process, it also hopes to try and weaken the ruling party with its massive two-thirds majority in the 87-member Parliament. By targeting India and India-funded projects out-of-place, they also hope to whip up some kind of ‘nationalist sentiments’ in party cadres, inherited from Yameen’s half-brother and long-term President, Maumoon Abdul Gayoom (1978-2008) – and also reach out to first-time and other young voters, who face a bleak future in a Covid-hit economy.

The last time Yameen hit out at Nasheed and the MDP, he was in the company of dethroned half-brother Gayoom, now estranged. Apprehending harassment after MDP reneged on the post-poll promise of constitutional impunity from prosecution for his years in office, Gayoom strategized the combined Opposition protest for Nasheed’s exit, linked it to the India infra giant, GMR Group’s work-contract for Male international airport.

In 2011-12, the combined Opposition co-opted religious NGOs, who with their ‘Islamic nationalist’ plank, into what really was a protest against Nasheed, with his alleged sympathies for the US and Israel. Straws in the winds have to be studied now for Yameen’s plans, if any, to introduce a new element of diversionary surprise, to gain greater legitimacy for what remains his personal cause. For his combine’s real motive to be achieved, Yameen has to unsettle President Solih and charismatic Nasheed, but by targeting an external factor like India.

On the side, Nasheed continues to swear by India at every turn. Denying the Opposition campaign against Indian military presence in the country and that the Solih Government was trying to ‘sell-off’ Maldives to India, he tweeted that the archipelago’s prosperity was, instead, linked to the larger neighbour. The nation maintains its independence because of India relations, he said and accused the Opposition of ‘spinning facts, and wrongly accusing the current administration of “selling the country”. He had no doubt President Ibrahim Mohamed Solih and his Cabinet will maintain bilateral relations with wisdom – the kind of quote that has become constant in his pro-India statements in recent months.

Separately, Defence Minister Mariya Ahmed Didi, in a tweet, described India as a “strong and formidable partner” that has helped the Maldives maintain its sovereignty and come to the country’s aid on numerous occasions. “I cannot be so intellectually dishonest about the actual facts of our relations,” she said.  It is again anybody’s guess what Minister Mariya Didi, a former chairperson of the MDP when Nasheed took over as the nation’s President in 2008, meant by ‘intellectual dishonesty’, and whom she was referring to, if at all.

Opposition propaganda through the past weeks has imagined Indian troops arriving at the northern Hanimaadhoo island in Haa Dhaalu Atoll, closer to the Indian mainland. The ‘India out’ campaign posts and posters also depict uniformed men with the Indian national flag. The hidden message, however, seems confined to whipped-up restlessness over the continued presence of Indian military personnel piloting and tending to the two helicopters gifted by New Delhi, and officially restored under Solih regime after the Yameen administration wanted to be taken back.

In this background, Maj-Gen Abdulla Shamaal, chief of the Maldivian National Defence Force (MNDF), told a news conference that no foreign troops were present in the country. Repeatedly denying that Indian military officers in the country had ‘ulterior motives’ as alleged, he stated that the helicopters were under the ‘command and control’ of the MNDF and were being used for rendering humanitarian assistance. If the helicopters are being serviced by Indian officers in the Maldives, Coast Guard vessels are re-fitted in India every two years, he pointed out.

The Indian Ocean is an important territory, Maj-Gen Shamaal said adding that apart from India, the US, the UK, Saudi Arabia, Pakistan and China too were providing military aid to broaden the capacity of Maldivian armed forces. “The military will not allow for anything to jeopardise Maldives’ freedom,” he said, adding that they would ‘preserve the Constitution and the freedom of the archipelago-nation’.

With Parliament going into scheduled recess after clearing very many civil service and judicial appoints, the PPM-PNC combine is going about the task of setting up steering committees on all islands. It goes beyond preparing the combine for the presidential polls that are not due before 2023, and nation-wide local government elections, whose term is being extended from three to five years. For now, the Election Commission (EC) has fined the PPM-PNC combine MVR 150,000, for violating health protocols during their protest rally.

EC President Ahmed Shareef, in a rare tweet of the kind, also cautioned political parties against supporting causes that endangered ‘national interests’. His tweet came after the police arrested a middle-aged islander, who wanted President Solih ‘must be lit on fire’ when Channel 13 TV sought public opinion on the performance of the current Government. The channel has since apologised for airing his views, but it is anybody’s guess why such a sentiment has crept into the politics and society of a distant island in the southern Thaa Atoll.