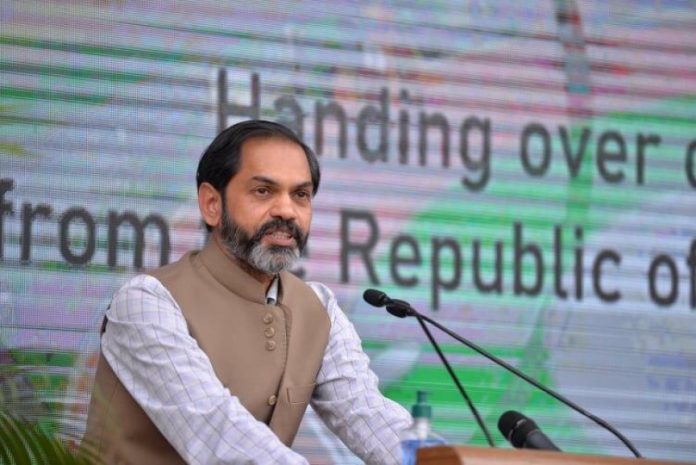 Male, Jul 28 (PTI) The Maldives on Tuesday launched nine community-based development projects, including a bottled water plant, which will use a USD 5.6 million grant from the Indian government.

Speaking at the launch, Indian High Commissioner Sunjay Sudhir said the projects are transparent and demand-driven in nature with full ownership of the Government of Maldives.

The high commissioner elaborated that all processes including tendering, price negotiations, the award of tenders, monitoring and execution were done by the Maldivian ministries and agencies.

He said the projects — which are for Maldivians, of Maldivians and by the Maldivians – reflect the democratic ideals cherished by the people of both Maldives and India.

‘A symbolic cheque of MVR 85 million (USD 5.6 million) was handed over to @abdulla_shahid by High Commissioner Sunjay Sudhir for implementation of 9 High-Impact grant projects (HICDPs) in a ceremony,’ the Indian High Commission in Male said in a tweet on Tuesday along with photographs.

At the launch function, the high commissioner underlined India’s comprehensive strategy of development cooperation with the Maldives.

As decided during the visit of President Solih to India in December 2018, the strategy includes both big projects under the USD 800 million Line of Credit and a large number of relatively small grant projects of cost not exceeding 8 million Maldivian rufiyaa each.

While the LoC projects with a longer gestation period will contribute significantly to the development of infrastructure in the Maldives, the grant projects are expected to have an immediate and positive impact on the lives of the island communities, Sudhir said.

This aid was in addition to the 106 million Maldivian rufiyaa (USD 7 million) extended to the South Asian nation at the time for small-scale projects.