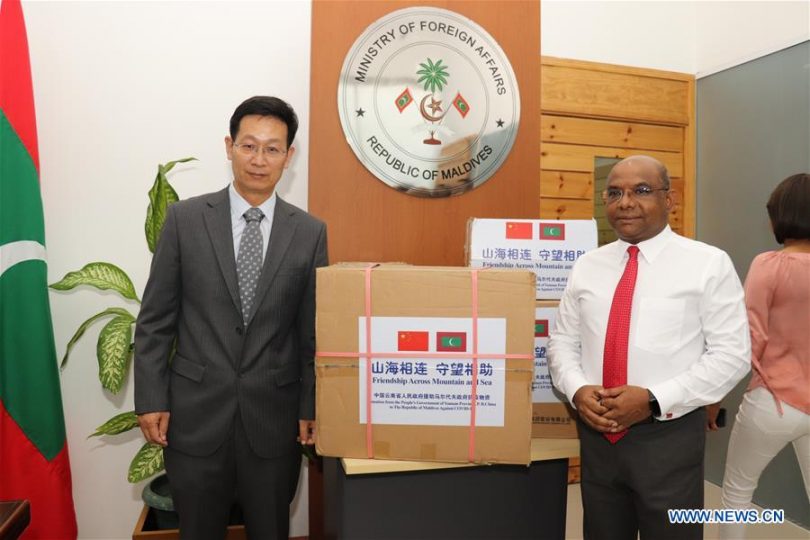 MALE, March 31 (Xinhua) — Maldives has seen an overall reduction of COVID-19 cases, with more patients recovering than new ones being confirmed amid stringent precautionary measures taken by the government. And China is helping the Maldives fight the virus.

Maldives has 17 confirmed cases of COVID-19, out of which 13 patients have made a full recovery, According to the latest data from the Ministry of Health. Only one Maldivian citizen has been tested positive for the virus, with the remaining being foreign workers and tourists.

By February, Maldives made arrangements with the World Health Organisation (WHO) to receive 1000 testing kits so that testing for the virus could be conducted locally. Meanwhile, the main airport was fitted with thermal cameras to screen incoming passengers.

Maldives confirmed its first two COVID-19 cases on March 7, as two foreign workers at a resort on the island of Kuredu tested positive for the virus. A temporary lockdown was placed on the island as the government began carrying out more tests.

On March 12, shortly after the World Health Organisation categorized COVID-19 as a pandemic, Maldives’ Minister of Heath Abdulla Ameen declared a 30-day state of emergency for the first time in the country’s history.

The Maldives has received its first shipment of aid, including much-needed epidemic prevention materials, from China to combat the COVID-19 pandemic.

At the handover ceremony, Shahid said the Maldives and China would remain united in the fight against the COVID-19.

The foreign minister said later on his official Twitter account “Sincere thanks to the government of Yunnan Province of China for its generous donation of much-needed epidemic prevention materials.”

Chinese Ambassador Zhang said that the aid from Yunan was a symbol of solidarity between China and the Maldives and a gesture towards forging a community of shared future.

“I hope this aid will help the Maldives government in its efforts to fight the pandemic,” the Chinese ambassador said.

The Maldives has had 17 confirmed cases of the COVID-19 so far.

In a statement made on the same day, President Ibrahim Solih said the government was taking effective measures to protect citizens and residents from the virus in accordance with WHO standards. “This is the time to work in unity, with wisdom and consideration, and under the guidance and instructions of health professionals,” Solih said.

Social distancing precautions have been applied to all members of society including politicians and elected officials. On Monday, the Maldives Parliament conducted its sessions via a web conference call and will continue to do so until the outbreak is contained.

The government has so far set up three dedicated clinics for COVID-19 where consultation is free of charge. Additionally, there are a total of 17 isolation facilities and 867 quarantine facilities in the country.

All individuals under quarantine are to be tested for COVID-19 in compliance with the WHO recommendations of testing as many individuals as possible.

WHO representative to Maldives Dr Arvind Mathur has commended the Maldives for its impressive and proactive efforts. In an interview with Maldives state-owned PSM News, Dr Mathur said the government has done well to raise public awareness through press conferences and media.

According to the WHO, Maldives has a population of 428,000 and spends 13 per cent of its GDP on healthcare.