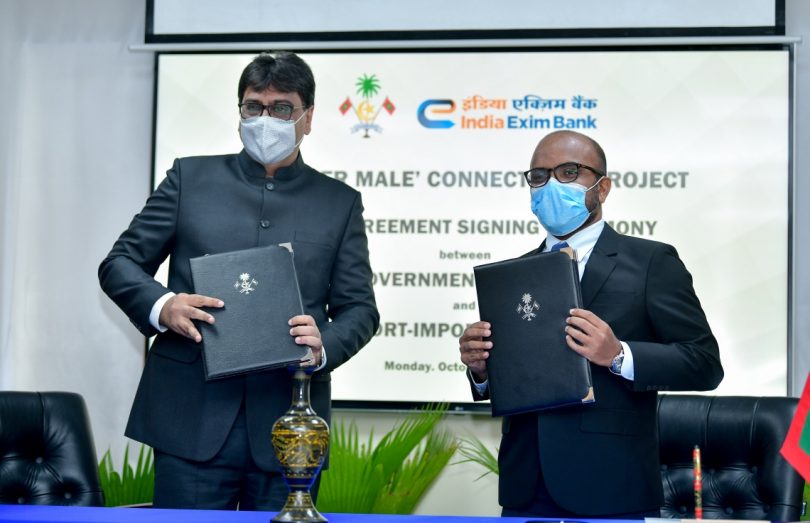 India’s Export-Import Bank (EXIM), on behalf of the government of India, on Monday, signed a USD 400 million credit line agreement with the Maldives to fund the Greater Male Connectivity Project (GMCP).

The agreement was signed by Minister of Finance Ibrahim Ameer and the EXIM Bank’s General Manager Nirmit Ved and Chief Manager Harish Kumar.

According to the Indian High Commission, the visiting delegation from EXIM will hold discussions with relevant ministries and government agencies including the Ministry of Economic Development, Ministry of Planning, Infrastructure and Housing, Ministry of Foreign Affairs and the Housing Development Corporation (HDC).

Furthermore, during a virtual meeting held between India External Affairs Minister Dr S. Jaishankar and Minister of Foreign Affairs Abdulla Shahid, India had also committed a USD 100 million grant to facilitate the GMCP, the largest connectivity and infrastructure project in the country.

With the project expected to commence by December, the project will see the development of multiple bridges and causeway networks that stretch upwards of 6.7 kilometres, connecting capital city Male’, suburb Villingili, and the industrial islands of Gulhifalhu and Thilafushi.

The loan must be repaid within 20 years and includes a grace period of five years. The credit line further mandates that 65 to 75 per cent of the project components be sourced from India.

The final tender for the ‘Engineering Procurement and Construction (EPC)’ contractors will be issued in the near future.