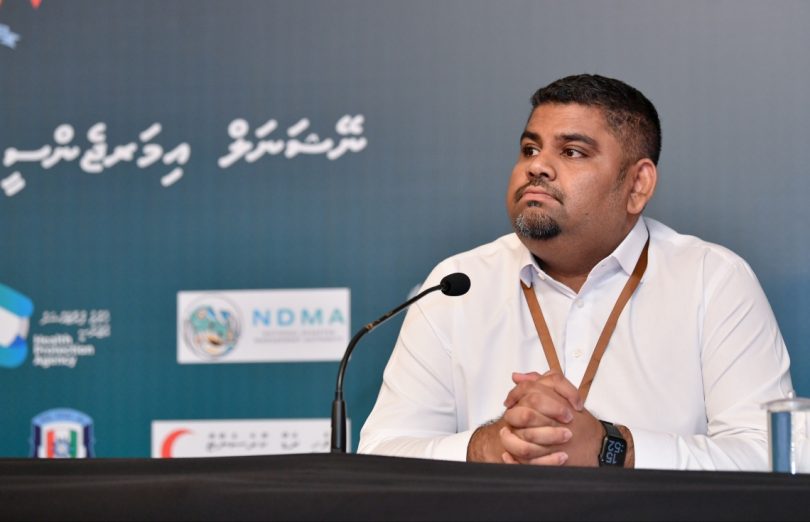 Communications Undersecretary at the President’s Office Mabrouq Abdul Azeez confirmed on Sunday that the Maldivian government presently held 4,800 kits to test for the COVID-19 virus, and was expecting the arrival of a further 29,000 test kits in the near future.

Speaking at the press conference held daily over the global COVID-19 pandemic at the National Emergency Operations Centre (NEOC), Mabrouq clarified that of the 4,800 currently in possession 1,000 were rapid testing kits.

Mabrouq, also the government’s official spokesperson for the crisis, also stated that in addition to the 29,000 kits pledged as foreign assistance to the country, state-run Indira Gandhi Memorial Hospital (IGMH) was set to acquire 6,000 kits before March 31.

Referring to the test kits, sharing the panel with Mabrouq as a representative from the medical community, Dr Nazla explained that the kits would test for antibodies produced by the body in reaction to the virus, and were not specifically designed to detect the presence of the virus itself.

“It may take up to 4 days for the body to produce a detectable amount of antibodies in reaction to the virus”, said Dr Nazla, adding that, “as such, there was still room for error in obtaining results”.

Stating that the best method currently available to test for the novel coronavirus is RT-PCR (Reverse transcription-polymerase chain reaction) testing, Dr Nazla confirmed it to be the technique used in the Maldives.

However, the doctor noted that there were faster tests available and that their team was working on obtaining the necessary cartilages as well.

The government has not yet released details on the number of testing machines and personnel available, hence although multiple tests are available, the feasibility of large-scale testing operations remains unclear.

Following the new recoveries, Maldives currently has four active cases which consist of two Maldivians quarantined after returning from the United Kingdom (UK) and two Italians that tested positive after departing from the country.

The World Health Organization has classified the spread of COVID-19 as a global pandemic. The novel coronavirus has infected over 734,990 people and claimed over 34,780 lives around the world. However, out of those infected, more than 155,965 people have recovered.