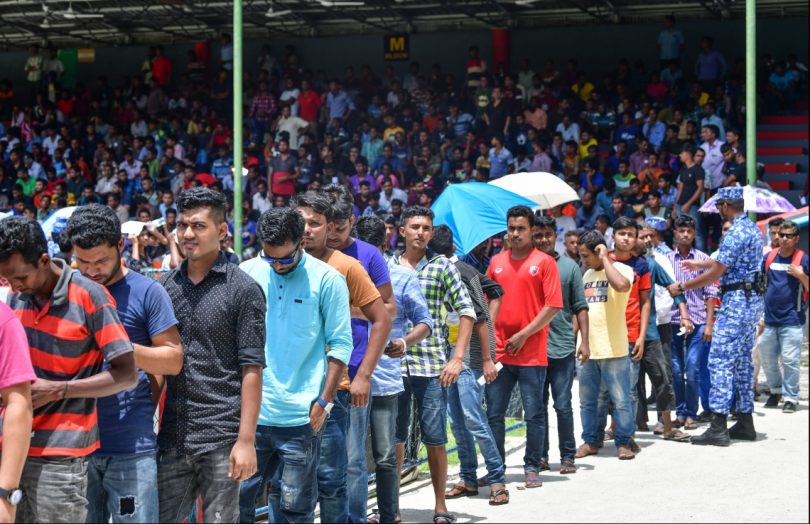 Minister of Foreign Affairs Abdulla Shahid revealed late Sunday that 70 Bangladeshi nationals with undocumented status will be repatriated on Monday.

The foreign minister confirmed that arrangements were made with the Bangladeshi government to bring Maldivians stranded in Bangladesh and Nepal on Monday, adding that the evacuation flight will depart the Maldives with 70 undocumented Bangladeshi nationals.

According to the ministry, the Bangladeshi military aircraft will carry a total of 71 Maldivians—53 stranded in Bangladesh, in addition to 18 Maldivians in Nepal. Additionally, a team of 10 medical professionals from Bangladesh will arrive in the Maldives to assist the Maldivian government’s efforts to combat COVID-19.

Foreign Minister Abdulla Shahid had earlier requested his Bangladeshi counterpart, AK Abdul Momen, for support in repatriating undocumented workers from the Maldives. In a previous call with the Bangladeshi foreign minister, Shahid noted the Maldivian government’s efforts to regularise undocumented expatriates in the Maldives prior to the emergence of COVID-19 in the country. He further highlighted that undocumented workers were among the most at-risk should an outbreak surface in the archipelago, and urged Bangladesh’s support for repatriation.

Bangladeshi nationals make up the majority of the expatriate population in the Maldives, which numbers at over 144,600, out of which authorities earlier estimated that 63,000 were undocumented.

As many expatriates live in small, unhygienic and congested spaces, particularly in capital Male’ City, officials have expressed concern that a COVID-19 outbreak would put them at most risk of contracting and spreading the infection.

Male’ City Council commenced an assessment of the residences and living conditions of expatriates in the capital city in March, to identify the number of foreign nationals living in or using a certain residence and to ensure that efficient protective measures are implemented should an expatriate test positive for the virus.

In April, the government revealed a decongestion plan to relocate approximately 1500 expatriate workers living in cramped conditions, designating Amin Hiya located in the suburb of Hulhumalé, for expatriate housing amidst the outbreak.

Presently, of the 23 expatriates that tested positive for COVID-19 in the Maldives, 21 are Bangladeshi nationals.

Internationally, Maldives has been pinpointed as a destination country in which numerous men, women, and children are subjected to forced labour and sex trafficking. It is widely known that migrants, primarily those of Bangladeshi and Indian nationality, who are working both legally and illegally in the construction and service sectors are often faced with conditions such as forced labour including fraudulent recruitment, confiscation of identity and travel documents, nonpayment and withholding of wages as well as debt bondage.