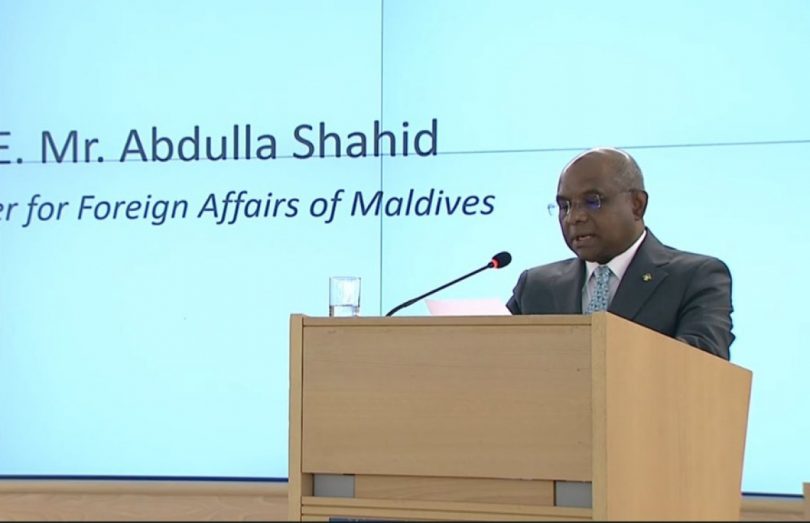 Minister of Foreign Affairs Abdulla Shahid and his Gambian counterpart, Mamadou Tangara, discussed Maldives’ decision to intervene in Gambia’s case at the International Court of Justice (ICJ) against Myanmar on Wednesday.

According to the foreign ministry, Shahid assured Tangara over a phone call that the government will consult and coordinate with the Gambia with regards to all work to be carried out in Maldives’ intervention.

Very pleased to receive a call from Gambian FM, Dr. Mamadou Tangara thanking the Maldives for its decision to intervene in support of the case before the ICJ, a Gambian initiative on the rights of Rohingya People. We will continue to work very closely on this important issue.

The foreign minister also commended the Gambian government and the Organization of Islamic Cooperation (OIC) on their unceasing efforts to safeguard the rights of the persecuted Rohingya people and ensure their safe return home.

The two ministers stated that the two countries will collaborate further in the future, with the common objective of ensuring justice for the Rohingya.

The OIC decided to establish the ‘Ad-Hoc Ministerial Committee on Accountability for Human Rights Violations Against the Rohingya’ with the Gambia as its chair, during its Council of Foreign Ministers in 2018. In the next meeting held the following year, OIC adopted a unanimous resolution to file a case at the ICJ to restore human rights for the Rohingya. At the 14th Islamic Summit later the same year, the OIC Heads of States endorsed the Final Communique of the Summit, authorising Gambia to pursue the case at the ICJ on behalf of the OIC, to restore basic human rights for the Rohingya and hold perpetrators accountable and bring them to justice.

Maldives’ decision to file an intervention at the ICJ to facilitate Gambia’s case was announced by Minister of Foreign Affairs Abdulla Shahid during his address at the 43rd Session of the United Nations Human Rights Council (UNHRC) in late February.

The announcement was welcomed by Muslim states around the world, including the 57 members of the OIC as well as the Rohingya diaspora and bodies advocating for the human rights of the Rohingya, such as the Free Rohingya Coalition (FRC).