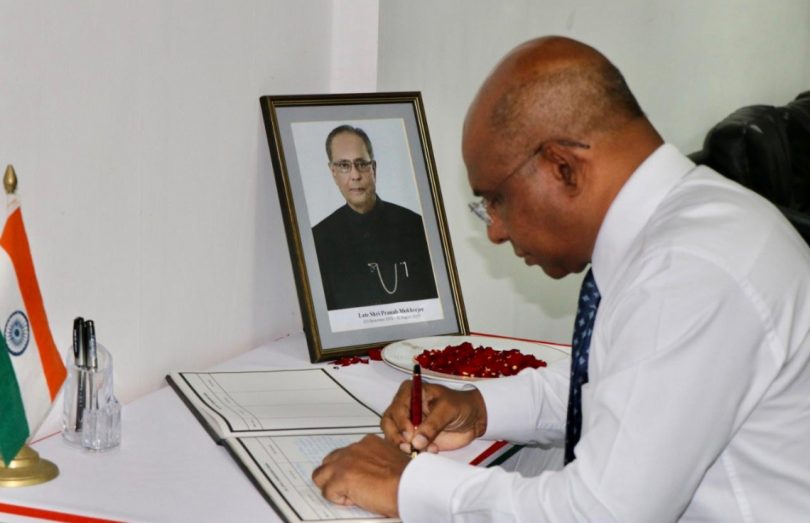 Minister of Foreign Affairs Abdulla Shahid on Thursday penned a message in the Condolence Book opened by the High Commission of India in the Maldives, dedicated to the late former president of India, Pranab Mukherjee, following his demise.

In his message, Shahid stated that he received news of the passing of India’s 13th president with deep sorrow, and extended condolences to Mukherjee’s family, and the government and people of India.

Shahid expressed happiness over his past interactions with Mukherjee when both of them had served in the capacity of foreign ministers.

Furthermore, he highlighted that then-President Mukherjee had warmly received him during his official visit to India in 2007.

President Ibrahim Mohamed Solih has also conveyed his condolences to the people and government of India following Mukherjee’s passing.

“India and all of South Asia mourn the loss of a dedicated public servant, whose lasting legacy will be cherished throughout the region for generations to come”, he had said.

The former Indian president, aged 84, who had tested positive for COVID-19, passed away on August 31 a few weeks after he underwent brain surgery.

His funeral was held the following day with full military honours.

The Indian government conferred the highest civilian honour, the ‘Bharat Ratna’, on Pranab Mukherjee in 2019.