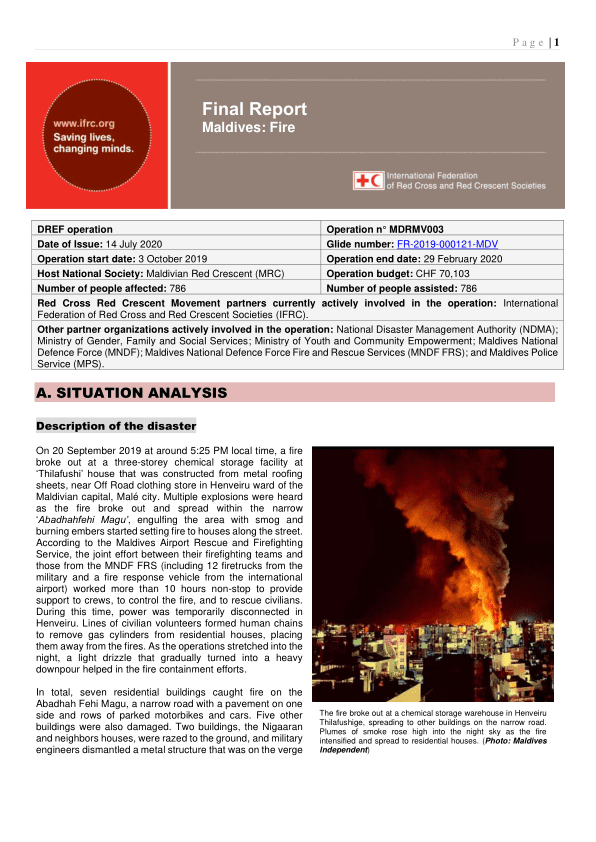 Description of the disaster

On 20 September 2019 at around 5:25 PM local time, a fire broke out at a three-storey chemical storage facility at ‘Thilafushi’ house that was constructed from metal roofing sheets, near Off Road clothing store in Henveiru ward of the Maldivian capital, Malé city. Multiple explosions were heard as the fire broke out and spread within the narrow ‘Abadhahfehi Magu’, engulfing the area with smog and burning embers started setting fire to houses along the street.
According to the Maldives Airport Rescue and Firefighting Service, the joint effort between their firefighting teams and those from the MNDF FRS (including 12 firetrucks from the military and a fire response vehicle from the international airport) worked more than 10 hours non-stop to provide support to crews, to control the fire, and to rescue civilians.

During this time, power was temporarily disconnected in Henveiru. Lines of civilian volunteers formed human chains to remove gas cylinders from residential houses, placing them away from the fires. As the operations stretched into the night, a light drizzle that gradually turned into a heavy downpour helped in the fire containment efforts.

In total, seven residential buildings caught fire on the Abadhah Fehi Magu, a narrow road with a pavement on one side and rows of parked motorbikes and cars. Five other buildings were also damaged. Two buildings, the Nigaaran and neighbors houses, were razed to the ground, and military engineers dismantled a metal structure that was on the verge of collapse. After engineering assessments were completed, a total of nine1 buildings were torn down for public safety.

During the emergency, 26 buildings in the neighbourhood with 87 households or apartments were evacuated on the night of the fire. Unfortunately, a 46-year-old woman who was reported missing was found to have succumbed to the fire after being trapped in her residence. MRC worked with other first responders on the scene including the Maldives National Defense Force (MNDF), MNDF Fire and Rescue Services (MNDF FRS) and Maldives Police Service (MPS). MRC assisted with guiding people to safety following evacuations, provided first aid to affected persons, and transported the more seriously injured to the hospitals – more than 50 people were rushed to the nearby ADK hospital, with one admitted and nine treated for smoke inhalation, and 15 people treated at the Indira Gandhi Memorial Hospital.

A relief centre set up in Kalaafaanu school hall facilitated the registration of displaced people, where MRC took the lead with NDMA in providing first aid, engaging in relief aid distribution, registration of Internally Displaced Persons (IDP), and identification of further needs for psychosocial support (PSS). Temporary accommodations were arranged for 302 people from 53 families while several people moved in with their extended families. Accommodation for displaced migrants was arranged by the government or by their employers. A total of 443 people was brought into Kalaafaanu School, Imaduddine School and Majeedhiyya School which were designated as relief centres for families affected by the fire.