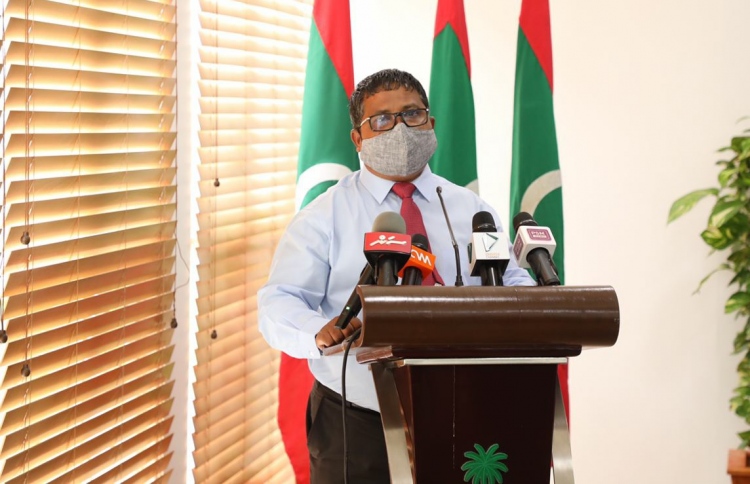 Minister of Environment Hussain Rasheed Hassan called for ease of access to climate funding for vulnerable small island states such as the Maldives.

Giving remarks to Climate Home News, Minister Hussain Rasheed underscored the dangers of rising sea levels to archipelagic countries, warning that the Maldives could be “lost to the world”.

The minister stressed the importance of providing access to climate funding for vulnerable states, stating, “We believe that we must be compensated for impacts caused by climate change. We are not responsible. Our total emissions are 0.003 per cent [of the global total]”.

According to Climate Home, Hussain Rasheed also revealed that the country needed an estimated amount of USD 8.8 billion to ensure coastal protection for inhabited islands.

Noting the government’s plans to establish climate risk insurance mechanisms in order to build resilience to climate loss and damage, as stated in Maldives’ updated Nationally Determined Contribution (NDC) submitted as a country ratifying the UN framework convention on climate change, Minister Hussain Rasheed stressed that developing the financing capacity was necessary to mitigate loss and damage shocks in the future.

“Our economy and life is tied to the oceans”, he said.

The Warsaw International Mechanism (WIM), an international framework set up in 2013 to address ‘loss and damage’, the impacts of climate change and global warming on countries, defines loss and damage as a subcategory to adaptation instead of its own issue.

Hence, although WIM intended developed countries to provide vulnerable developing nations with finance, technology and capacity-building, ‘loss and damage’ do not receive the recognition or finance it deserves, stated Climate Home.

In this regard, Minister Hussain Rasheed noted that a lack of comparable data on the scale of climate damages was an issue.

“We have got to develop international standards and measurement mechanisms so that loss and damage can be assessed in a more scientific manner. The Warsaw International Mechanism is not capable of dealing with this”, Climate Home quoted the environment minister.

The NDC also stated that the Maldives would require all vehicles to be up to a certain standard to reduce harmful emissions, in addition to increasing hybrid vehicles.

The Maldives declared its target to cut down emissions by 26 per cent by 2030 as well.

Furthermore, President Ibrahim Mohamed Solih recently pronounced that the Maldives could achieve net-zero emissions by 2030 with international support. However, it is of note that little has been done overall to reduce emissions till date. The government, state bank and local councils continue to show respective leniences over vehicular import, low instalment and loans for vehicles, and stalling of introducing subsidiaries or removing fees for those seeking renewable energy options. The generally lacklustre road controls, particularly in capital Male’, also contribute to emissions, rounded out with a poor record of enforcement.

The Maldivian Parliament declared a climate emergency in February 2019. However, despite Maldives’ stance in the international arena, including advocacy at the COP summits and the country’s call to criminalise ecocide at the International Criminal Court (ICC), the government faces criticism from environmental activists and NGOs over continuing to reclaim land and lagoon areas for development purposes, often in contrast with the ruling party’s own electoral pledges.