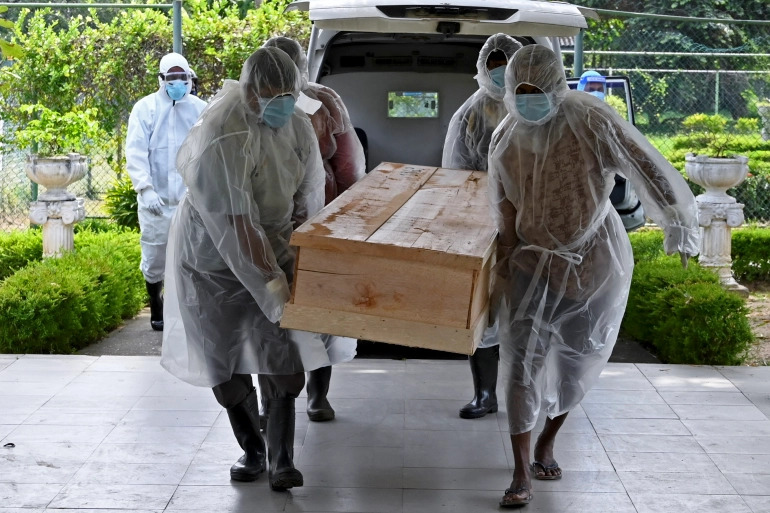 As outcry about Sri Lanka cremation policy grows, Maldives says it is considering request to bury Muslims who die of COVID-19.

Colombo, Sri Lanka/Male, Maldives – A United Nations human rights expert has denounced Maldives’s announcement it was considering burials for Sri Lankan Muslims who die of COVID-19, saying such a move “could end up enabling the further marginalisation of Muslim communities in Sri Lanka”.

Wednesday’s statement from Ahmed Shaheed, the UN’s special rapporteur on freedom of belief, comes amid intensifying criticism of a government rule in Buddhist-majority Sri Lanka that mandated anyone who dies of COVID-19 must be cremated – a practice forbidden in Islam.

Muslims in Sri Lanka have criticised the policy by President Gotabaya Rajapaksa’s government as “discriminatory” and have insisted that burials should take place in their country.

The neighbouring Maldives, a Sunni Muslim country, stepped into the fray on Monday, with Foreign Minister Abdulla Shahid announcing that authorities were considering a “special request” from Rajapaksa to facilitate “Islamic funeral rites in the Maldives for Sri Lankan Muslims succumbing to the COVID-19 pandemic”.

In a Twitter post, Shahid said, “This assistance will offer solace to our Sri Lankan Muslim brothers and sisters grieving over burial of loved ones.”

“It looks like the request did not come from the Muslim community or with their consent, and could end up enabling the further marginalisation of Muslim communities in Sri Lanka,” Shaheed said in a statement to Al Jazeera, noting that the World Health Organization’s (WHO) guidelines permit both cremation and burials for people who die of COVID-19.

Muslims make up nearly 10 per cent of Sri Lanka’s 21 million people. Since the end of a bloody decades-long war between Tamil separatists and the military in 2009, they have faced increasing hostility from Sinhalese Buddhist nationalists.

The hardline groups accuse Muslims of high birth rates and forcing people to convert to Islam to reduce Sri Lanka’s Sinhala Buddhist majority, who make up 70 per cent of the country’s population. In recent years, mobs – often egged on by hardline Buddhist monks – have targeted homes and businesses of Muslims, as well as their places of worship.

The hostility only increased in the aftermath of the deadly suicide attacks on churches and hotels in April 2019 that were claimed by the ISIL (ISIS) group.

The Sri Lankan government introduced the cremation policy in March, saying the coronavirus could contaminate underground water. The move drew criticism from the UN and rights groups, as well as opposition politicians in Sri Lanka.

The government has not confirmed if Rajapaksa asked the Maldives to facilitate burials and the president’s spokesman Keheliya Rambukwella told Al Jazeera on Wednesday that the matter was never discussed with the cabinet.

Sri Lankan officials have suggested the Maldives initiated the move, with Hemantha Herath, the deputy director-general of Public Health Services, telling the Daily Mirror on Monday that the Maldivian government has “stepped in” to facilitate burials.

“Because they are broken up into islands, and do not face the same issue as us,” he was quoted as saying. “The Maldives government has offered to bury the dead bodies in one of their islands … We do not know how practical this is till the feasibility is conducted. The practical options have not been explored yet. Only then can we tell if this is going to happen or not.”

The Maldivian government said consultations on Rajapaksa’s request – made during a phone call on Monday with his Maldivian counterpart, Ibrahim Mohamed Solih – were continuing.

“We are considering what would be the appropriate and humane response,” said Ibrahim Hood, a spokesman for Solih.

The development, however, has angered many Maldivians, many of whom took to social media to express their outrage. Aya Naseem called it “supporting racism towards Muslims under the guise of Islamic heroism”, while Afa Rameez described the move as the Maldives “playing along when our neighbours are being Islamophobic”.

Just cannot get my head around this ‘collaboration’. We should not be supporting the violation of Sri Lankan muslims’ rights to be allowed to be buried in their own land. Y not facilitate that instead? Supporting racism towards muslims under the guise of islamic heroism. #Twisted https://t.co/FvW5iz2vdx

So basically we are just playing along when our neighbors are being islamophobic af. How’s that normal? Are we that small of a country to take a stand against this?

Some, however, spoke in support of the Maldives assisting in Muslim burials.

Mohamed Shaheem Ali Saeed, a former Islamic Affairs minister, said he believed the Maldives should help Sri Lankan Muslims if their rights were being denied, declaring in a tweet: “Muslim corpses must not be cremated.”

In Sri Lanka’s capital, Colombo, one Muslim man said he considered the Rajapaksa government’s cremation policy “racially motivated”. Mohideen, whose aunt was cremated after she died from COVID-19, said, “The government has made this a political issue and now the Sinhalese think that if we are allowed burials, it would be a political defeat for them.”

NFM Fahim, whose 20-day-old infant was also cremated this week, said he was “devastated” by the move. “I didn’t have the heart to receive the ashes,” the 38-year-old said. “My wounds will begin to heal only when they put an end to the forced cremations.”

Fahim’s son, Shaykh, was among 19 Muslim COVID-19 victims that Sri Lanka’s government cremated against their families’ wishes this week. The move came after the country’s Supreme Court rejected a petition challenging the cremation policy on December 1. The court did not give a reason for the move.

Fayaz Joonus, one of the petitioners, called the policy “sad and traumatic”. He added: “Sri Lanka is the only country in the world that is forcing Muslims to cremate the dead.”

Some 55 of Sri Lanka’s 157 COVID-19 dead were Muslims, according to health authorities. The country has recorded a total of 34,121 cases since the beginning of the pandemic.

Last month, Hanaa Singer, the UN’s resident coordinator for Sri Lanka, implored the Sri Lankan government to revise its stance on cremation and allow “the safe and dignified burial of COVID-19 victims”.

“I fear that not allowing not allowing burials is having a negative effect on social cohesion and more importantly, could also adversely impact the measures for containing the spread of the virus as it may discourage people to access medical care when they have symptoms or history of contact,” she said in a letter.

Amnesty International also denounced the cremation rule earlier this month, saying Sri Lanka’s Muslims face “the fear of not being able to bury [their] loved ones and being denied dignity in that final moment”, also noting that “to add insult to this injury, the families are being forced to bear the cost of the cremation.”

“I want to reiterate that we are not moved by racism and we don’t want to discriminate,” he said, adding that the policy was recommended by a government-appointed panel of experts. “We will always listen to experts and decide on what they say. We are not taking arbitrary decisions … The policy on cremation applies to all. This law is not applicable only to Muslims.”

“I am thankful and grateful to the generous offer by the Maldives. However, we can’t accept this offer because it will only cover up a gross violation of Muslims’ rights,” said Ali Zahir Moulana, a former legislator.

“We want to be buried in Sri Lanka. In our land,” he told Al Jazeera. “The government defies science and international pressure.”

Rauff Hakeem, the leader of Sri Lanka’s Muslim Congress, also rejected burials in the Maldives. Instead, in a letter posted on Twitter on Wednesday he said, “We, Muslims will demand that our government reverse its unjustified cremation policy which is not based on epidemiological science”.

Hakeem added: “We will resist any attempts by our government to use this offer to deny our fundamental right to live and be buried in our beloved country with dignity.”