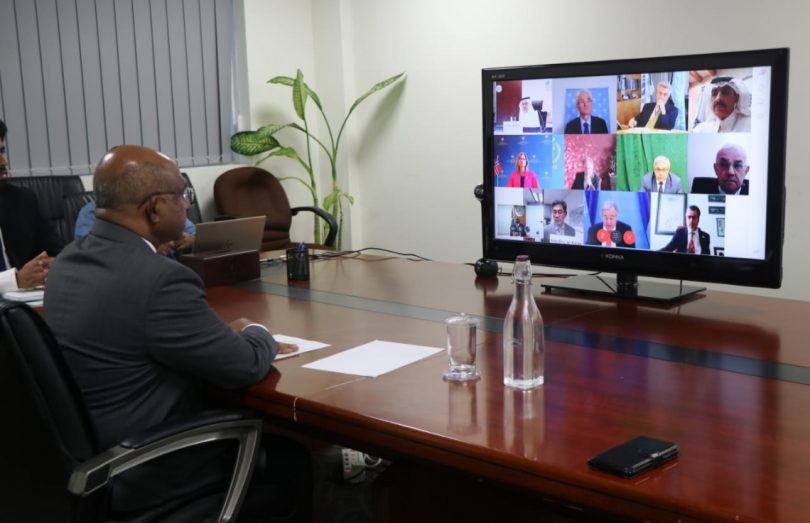 Minister of Foreign Affairs Abdulla Shahid on Tuesday called for a ceasefire in Yemen, urging international solidarity to alleviate the humanitarian crisis in the country.

Speaking at the virtually held ‘High-Level Pledging Event for the Humanitarian Crisis in Yemen’, Shahid raised concerns on the escalating conflict and subsequent crisis in Yemen, urging a ceasefire over widespread famine and forced displacement.

The minister declared that establishing peace in Yemen is an important link to ensure stability in the Middle East and Islamic solidarity.

He also highlighted the debilitating repercussions of the ongoing COVID-19 pandemic on the situation in Yemen.

I’m honoured to participate in the High-Level Pledging Event for the Humanitarian Crisis in #Yemen. The important pledges made today must be realised, to provide urgent food & aid for the Yemeni people. #Maldives fully supports the unified global response to alleviate the crisis. pic.twitter.com/za52Lej1xG

“The people of Yemen must be granted unhindered access to channels of humanitarian aid which must remain functional, under all circumstances”, he said.

Calling for a unified global response to meet the needs of the Yemeni people, Minister Shahid declared the unwavering support of the Maldives towards alleviating the crisis.

Several member states of the UN made pledges at the event, witnessed by international financial institutions, leading UN agencies and humanitarian NGOs.

Ignited by the 2011-2012 political revolution against the Yemeni government, the following political divisions and military intervention led by the Saudi coalition have led to what is described as the “worst humanitarian crisis in the world” by the UN.

Over 24 million people, which accounts for approximately 80 per cent of the Yemeni population are in need of humanitarian aid while the conflict has killed thousands of people. The UN confirmed at least 7,500 civilian deaths by September 2019, although monitoring groups believe the toll is higher. The Armed Conflict Location and Event Data Project (ACLED) based in the United States reported more than 100,000 fatalities in October 2019, including 12,000 civilians.