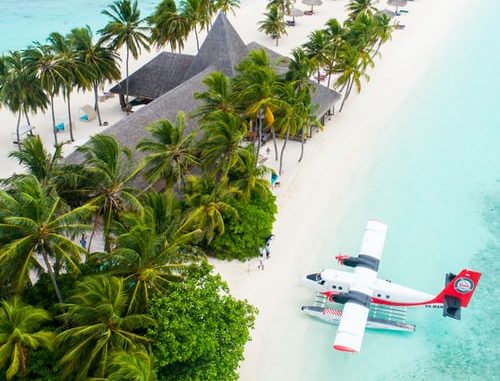 Colombo — The South Asian island country Maldives, situated in the Arabian Sea of the Indian Ocean, is drawing an influx of tourists from nearby India since it lifted its travel restrictions on July 15.

With its tropical climate and its isolated chain of hundreds of inhabited islands, the Maldives records 1,011 arrivals from India from July 15-Oct. 21, ranking 10th among the top markets for tourist arrivals, according to the Ministry of Tourism. The most arrivals (6.026) were from Russia, and nearly 3,000 were from the United States.

“Our usual markets are from the European nations, but this year the majority of tourists have been from the U.S., India, and Russia,” said Abdulla Mausoom, the Maldives minister of tourism.

The Maldives has been able to boost its revenue from the tourism sector during the pandemic, which has shut down travel to most countries in an effort to control the spread of Covid-19.

“We have been able to achieve targets and have seen a 125 per cent increase in tourists from the previous month. With the present trend, we should be able to reach one million tourists for 2021,” said Mausoom.

The country expects to connect 25 international destinations by Christmas. 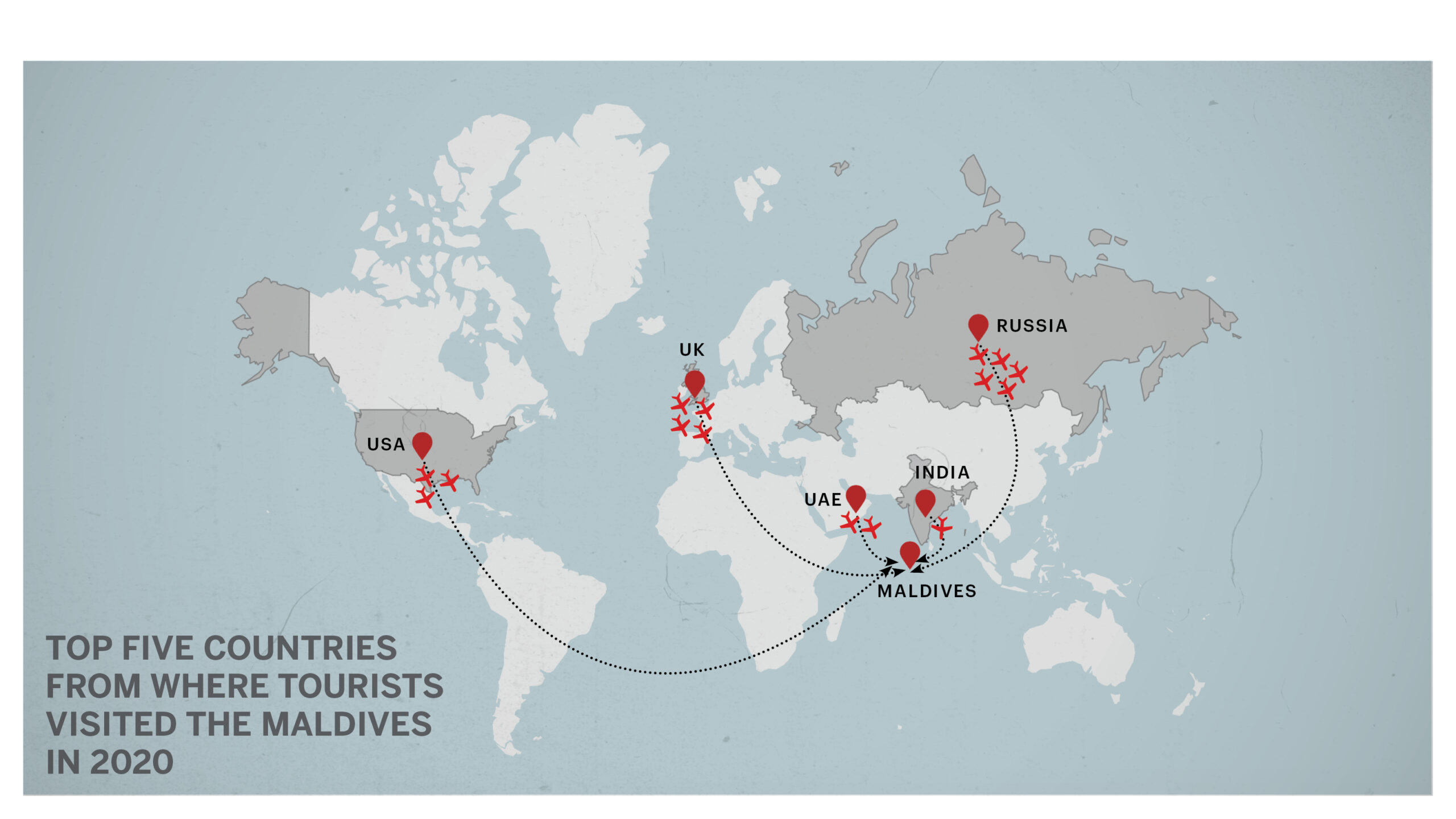 “The geography of the Maldives enables us to operate safely as the islands are separate from each other, and the industry is ready to provide the tourists with a safe holiday experience,” said Mausoom.

The Maldives began working on revising its marketing campaign in March when the country was closed to travellers. In July, the Maldives Marketing & PR Corporation (MMPRC) launched its “Rediscover Maldives” to welcome back tourists. It promoted the Maldives to be the safest destination in the world in the current scenario. In September, the government received a Safe Travel Stamp from the World Travel and Tourism Council and endorsed by the UN World Tourism Organization. It is described as “the world’s first-ever global safety and hygiene stamp for travel and tourism, designed to address Covid-19 and similar outbreaks.”

“When tourism stops, everything stops in the Maldives,” said Mausoom. “It is the livelihood of the people. If the Maldives does not open up, it will choke. We need the dollar to buy our food and fuel as our economy is highly dependent on tourism and there is no domestic economy here.”

In the second quarter (April-June) this year, the country’s National Bureau of Statistics recorded a 51-per cent drop in GDP. Fitch Ratings stated in November that it “expects the island nation’s economy to contract by 30.0% in 2020, one of the sharpest drops in economic activity globally.”

“If the tourism sector crumbles in the Maldives, it will cause an internal crisis and there will be pressure laid on the ruling government,” said M Nillanthan, a political analyst.

Mausoom said the government wanted to push the tourism developments in the islands as there were “some important upcoming developments” and the president wanted to give the benefits from tourism to the local communities.

The government is trying to restore tourism on the island as it continues to open more venues to boost tourist attractions, despite an increase in cases. In the 10 days from Nov. 3, the islands recorded 577 cases. To date, the islands have recorded a total of 12,355 cases, 11,388 recovered, and 45 deaths.

Recently, the island of Kandima, 42 miles off the coast of the capital Malé, recorded cases of the virus. About 60 people living at a resort on the island tested positive on Nov. 9, with another 44 people identified as secondary contacts. 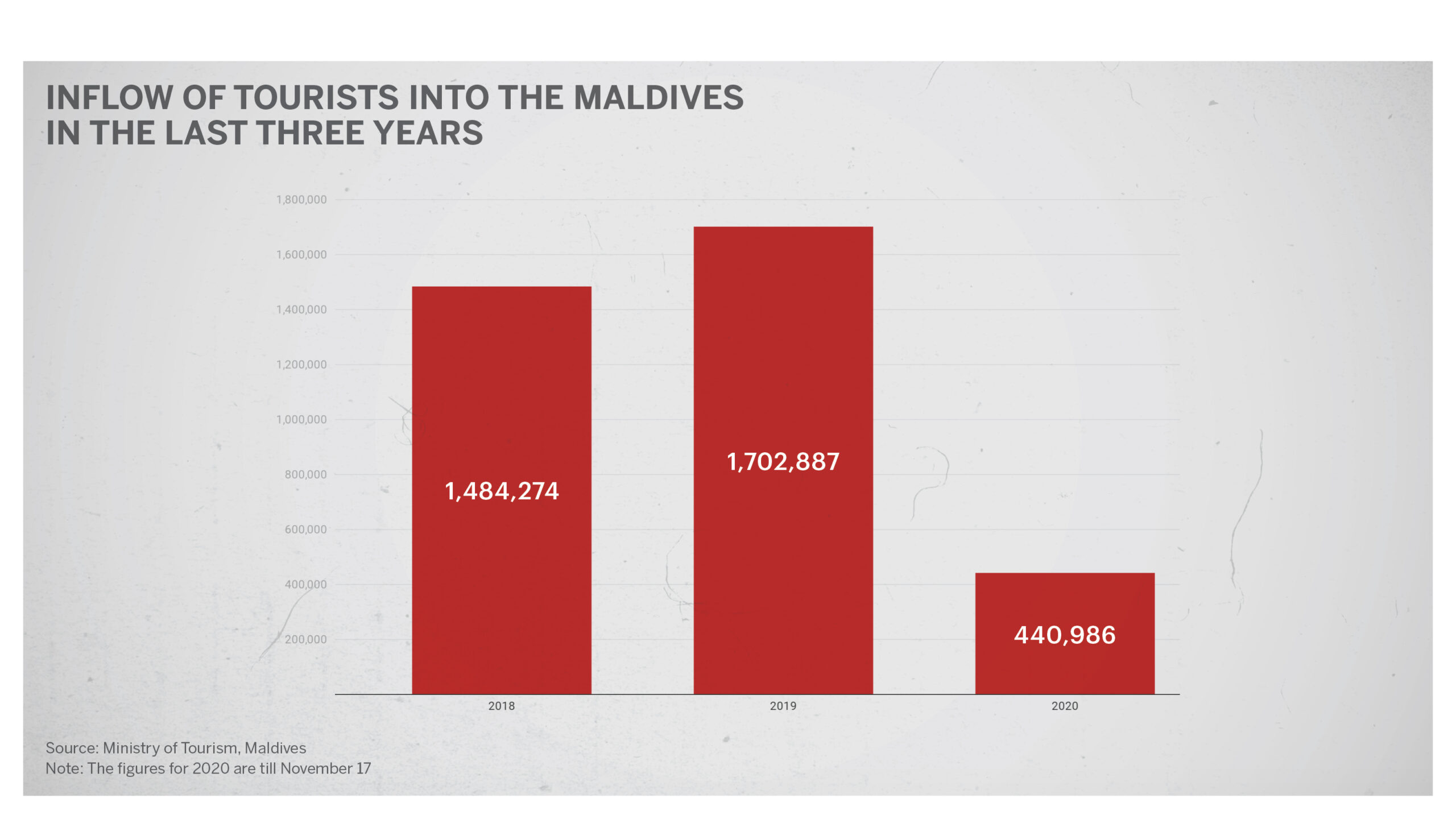 Members of the opposition party blame the government’s under-researched tourism campaign as the main cause of the recent outbreak.

“The information passed on by the Maldives’ Health Emergency Operations Centre is heavily controlled by the president’s office. Kandima is a victim of the lack of transparency and heavy censorship of information by the government,” said Mohamed Hussain Shareef, vice-president of the opposition Progressive Party of Maldives.

Shareef said the government was not ready to give any information on Kandima until an elderly staff member at the resort was transferred to a nearby uninhabited island, where he eventually died. He said the health ministry had repeatedly urged the government to acknowledge what had happened, but no one paid heed.

“The family of the deceased said he had tested positive several days before and had all the symptoms. The resort and the island authorities were alerted but no one outside of that was informed,” Shareef said.

Neither the HEOC spokesperson nor the Ministry of Health responded to queries from Zenger News.

“The test results [locally] take over a week to come back and this usually leads to the continued spread of the virus,” said Shareef.

Mausoom agreed that delivering test results within the estimated time of six hours was a challenge for the country and that the spread of Covid-19 among the locals is serious.

With the total number of tourist arrivals at  51,354  from July-November, Shareef questioned the planning behind the tourism campaign.

“The papers of the campaign were just a handful, with little research done on the agendas. It was a clear indication the Maldives was ready to open its borders for tourism,” said Shareef. “While quarantining has worked for curbing the spread of the virus within an island, handling the crisis was not done efficiently, which led to the outbreak.”

He believes the government intentionally manipulated information about the cases of Covid-19.

“The government did not want this to go out as they are relying on sustained tourism to keep the economy afloat as the government’s treasury is coughing up dry,” he said.