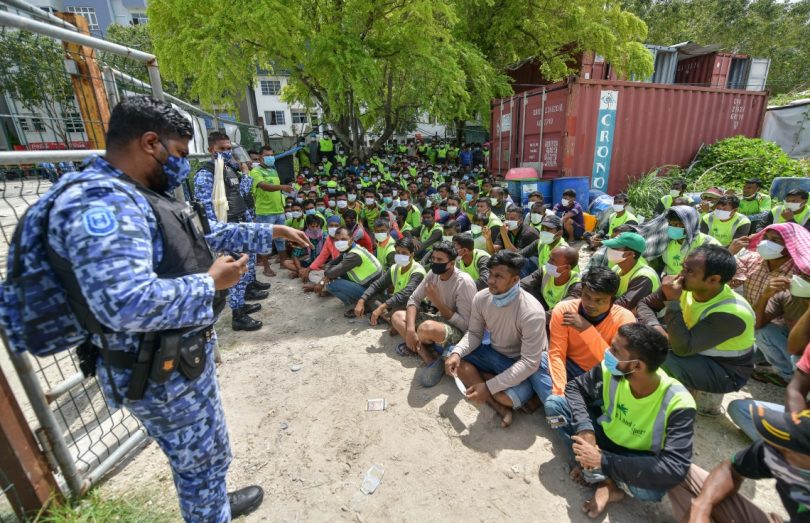 The rights group said the protesting migrant workers were detained in July with senior defense officials terming the protests as “riots,” and labeling the migrant population as “an issue to national security.”

“Instead of suppressing protests, Maldives authorities should address and remedy the violations of migrant workers’ rights that are spurring people to the streets.”

The officials have “denied that the protests stemmed from longstanding human rights violations,” the rights watchdog said in a statement.

The group urged the authorities to release all those held for engaging in peaceful protest and drop all charges against them.

The government of the island nation should address allegations of human trafficking and other abuses against its sizable migrant worker population, the statement said.

Migrants working in construction and tourism industries have held demonstrations since May to protest withheld wages amid reports of exploitation and mistreatment, according to the group.

The rights watchdog said that on July 2 the police arrested 19 protesters who “had been forced to work without pay for six months.”

The protesters had prevented 13 local staff from leaving the island. The police later announced they were investigating the employer for alleged human trafficking, wage theft, and firing employees for protesting their unpaid salaries.

The authorities arrested 41 migrant workers on July 13 following a confrontation in which the workers damaged police vehicles.

The workers, who were employed by a construction company, were protesting non-payment of wages since March when the government imposed a lockdown to slow the spread of COVID-19.

Some 22 migrant workers, who were taking part in a protest, were detained by police on July 21.

Defense Minister Mariya Ahmed Didi told a parliamentary panel that the claims of withheld wages were a pretext for migrant workers to stage protests and cause unrest.

She said the government believed that “this is tied to national security.”

Chief of Defense Force Maj. Gen. Abdulla Shamaal has said that migrants posed a threat to Maldives’ national security since they were “actively involved in crime.”

Shamaal went on to announce plans for a crackdown targeting the migrant population, according to HRW.

Authorities estimate there are about 82,000 registered and 63,000 undocumented migrant workers in the Maldives – around one-third of the total population –, the majority of them from Bangladesh.

The COVID-19 outbreak on the island has disproportionately affected them, exacerbated by poor living and working conditions, while spotlighting existing abuses.

“Against the backdrop of COVID-19, Maldives authorities should be looking to boost protections for its most vulnerable groups, not put them in the crosshairs of a manufactured national security crisis,” Gossman said.

“The government should focus its efforts on ending human trafficking, upholding the rights to freedom of speech and assembly, and ensuring migrants have safe housing, get access to health care, and receive their wages.”