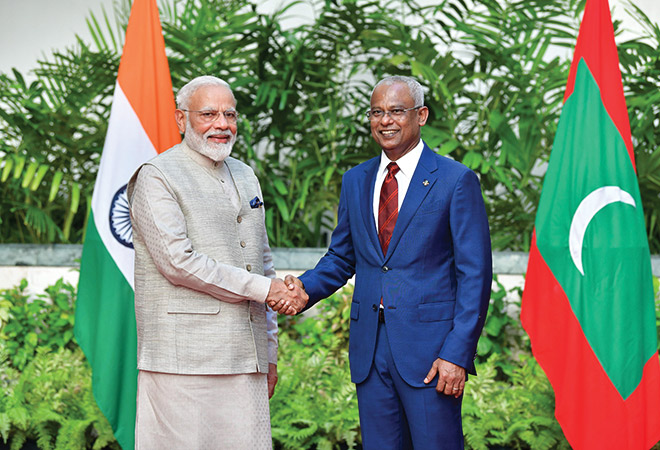 The Maldives commemorates 3 November as ‘Victory Day’ after Indian troops flew in without navigational aid and aborted Sri Lankan Tamil mercenaries’ coup-bid against Maumoon Abdul Gayoom in his tenth year as President in 1988. Mercenaries killed 18 Maldivians, including nine soldiers, while India’s ‘Operation Cactus’ was casualty-free.

Gayoom, whose life and regime the Indian troops saved for him to continue as President for 20 more years is now silent on the opposition’s ‘India Out’ campaign. Mystery also surrounds his successor Nasheed’s government granting bail to coup leader Abdulla Luthfee, who left the country before the arrest, years later, in neighbouring Sri Lanka — and brought back to a Maldivian prison by the Solih regime.

In his ‘Victory Day’ statement, Minister Shahid said that building national resilience and investing in lasting ties with the international community are key to countering 21st-century threats. Elaborating it in an interview to SunOnline news portal days earlier, he said: “We haven’t reached the level to say India Out, US Out or Japan”, referring also to a military exercise with Japan in October. The ‘India Out’ campaign was not patriotic, but hate-mongering, he said, adding that those behind such campaigns either lacked self-confidence in the nation or wanted to distance the Maldives from the rest of the world.

Likewise, Maj Gen Abdulla Shamaal, chief of the Maldives National Defence Force (MNDF) told another interviewer that no country can protect itself by remaining isolated, facing cross-border terrorism and transnational security threats in the modern world. The Maldives lies in a strategic location in the Indian Ocean, making international cooperation all the more important, Shamaal said.

“Given this vastness (of Ocean territory), it is very important for us to work in partnership with other countries. We need to work with Sri Lanka and India to make this region safe and secure,” the MNDF chief said, after participating in the ceremonial ‘guard-mounting’ ceremony on the ‘Victory Day’, along with Defence Minister Mariya Didi.

The constant reference to ‘international cooperation’ in security matters has to be read also in the context of Maldives signing a ‘Framework Agreement’ for defence cooperation with the US in September. Earlier, in 2016, the administration of jailed former President Abdulla Yameen, now identified with the ‘India Out’ campaign, had signed a ‘military cooperation’ pact with New Delhi. President Solih’s ruling Maldivian Democratic Party (MDP), then in the opposition, claimed ‘lack of transparency’ and accused the Yameen government of ‘allowing foreign military presence’ which was promptly refuted.

The ‘India Out’ campaign is centred on the two gifted Indian helicopters and their personnel, used exclusively for humanitarian operations, under MNDF’s command. As MNDF’s Shamaal assured the nation, only “technicians, technical personnel serving humanitarian purposes (and those) aiding us and fulfilling our needs are working in the Maldives”.

No issues with the US

The Opposition combine — comprising the Progressive Party of Maldives (PPM), founded by Gayoom, estranged half-brother and the People’s National Congress (PNC), which Yameen founded ahead of last year’s parliamentary polls – has not commented on the ‘Framework Agreement’ with the US. Though issued after he had left, the combine, in a statement, welcomed the October-end visit of US Secretary of State, Mike Pompeo – that too after he had targeted China, considered a friend of Yameen.

The first US Secretary of State to visit the Maldives in 16 years after Colin Powell in 2004, preceded by James Baker in 1992, Pompeo said that the security of small island nations have taken new importance “as the ‘ Chinese Communist Party continues it is lawless and threatening Of particular interest to the Maldives, an archipelago-nation, he mentioned how “Chinese state-owned companies trash the environment” and how  Chinese activity in illegal fishing had led to harmful effects on the industries, economies, and livelihoods of countries ranging from Madagascar to Indonesia”.

Pompeo announced the imminent opening of a US embassy in Male, following those of India, Sri Lanka, Bangladesh, Pakistan, Japan, China and a few others. He also pledged US assistance regarding the negative impact of climate change, apart from the current financial assistance by the Trump administration.

In this background, the combine’s statement highlighted the long history of the US as a developmental partner and expressed optimism that the visit further consolidated bilateral ties. The combine also hoped that Pompeo’s talks (with the Solih dispensation) would strengthen Maldives’ response to Covid-19 and the economic repercussions of the pandemic.

The Yameen opposition also expressed further hope that bilateral discussions touched on the necessity of maintaining the ‘fundamental principles in Maldives’ – without elaborating. Eyebrows have been raised when the combine emphasised the need for US assistance in increasing transparency in governance and boosting national efforts at ending corruption – issues on which the Yameen presidency’s scores were from low to very low.

In this background, the Yameen camp’s ‘India Out’ combine seems to be more personalised than even politicised, considering that the US and China are the ones fighting the ‘super-power game’ in a critical Ocean territory is not theirs. Against this, India’s security concerns are genuine, and its approach to the Maldives has always been one of mutual respect and benevolent cooperation.

Independent of the Yameen combine’s opposition, the MNDF announced the arrival of an Indian Navy ship for the 71stsurveillance patrol of the Maldivian EEZ for a week, since such patrols commenced in 2009.  Of equal, if not greater, importance, and on the civilian side, is the Indian private airliner SpiceJet launching its first seaplane operations, with assistance from ‘Maldivian’, the national carrier of the archipelago-nation.

Prime Minister Narendra Modi was on the inaugural flight — launched under his Government’s UDAN scheme for affordable regional connectivity – from Kevadia, the site of the ‘Statue of Unity’, the world’s tallest one at 182 m, for freedom-fighter Sardar Vallabhai Patel, and Ahmedabad, both in north-western Gujarat state. As Mohamed Rizvi, managing director of ‘Island Aviation’, which operates the ‘Maldivian’ said: “This opportunity will boost the confidence between the two countries considerably and greatly boost trade.” He described as a mutually-beneficial “win-win situation”.

In the past, most bilateral cooperation efforts on the economic front have involved the one-way flow of funds, including the US$1.4 billion aid-package signed with the Solih administration, and the substantial US$250 million pandemic assistance. Against this, the sea-plane service, as and when taken to the logical conclusion, may provide an opportunity for the reverse flow of technical expertise.

Given that tourism is the mainstay of the Maldivian economy, the Nasheed presidency (2008-12) had also offered Maldivian expertise to develop high-paying resort-tourism in India’s island-groups. Given the security concerns and related considerations, the Manmohan Singh government had reportedly put it on the hold for a time, pending further internal assessments.

The Indian concerns at the time included the evolving security scenario in the shared waters caused by increasing Chinese ambitious and presence and also the emergence of religious terrorism in the Maldives. The Yameen administration fuelled the former and acknowledged the latter through later-day arrests.