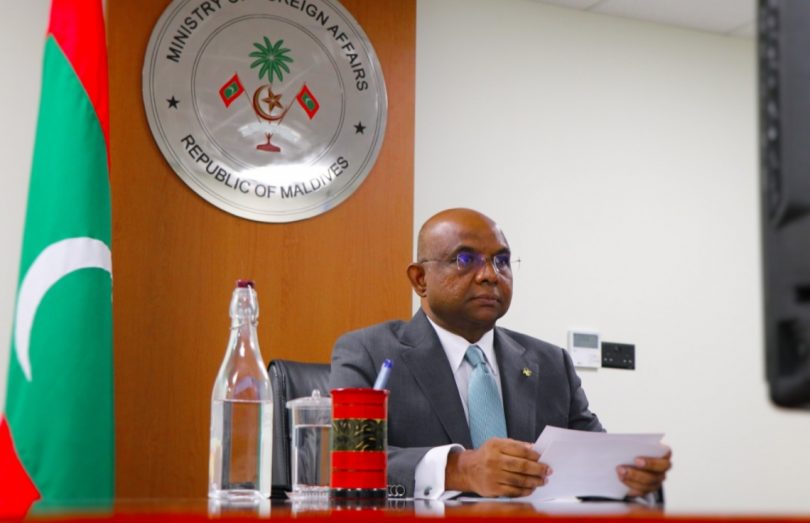 Minister of Foreign Affairs Abdulla Shahid declared that the Maldives will always be at the forefront in advocating against the dangers of climate change.

He made the statement while participating in the Berlin Climate and Security Conference (BCSC) 2020 via video conference on Tuesday.

In his remarks, Minister Shahid reiterated that the Maldives will continue to foster global consensus on actions to stop and reverse the effects of climate change. Highlighting its dangers, he stressed the need to forge partnerships to find solutions.

Hosted by the German Federal Foreign Office, in partnership with Adelphi and the Potsdam Institute for Climate Impact Research (PIK), the first part of the annual Berlin Climate and Security Conference began Tuesday afternoon, with leading representatives from governments, international organisations, the scientific community, the private sector and civil society in attendance. Two scientific online workshops and a digital high-level political segment are also scheduled to be held Wednesday.

The second part of the BCSC 2020 is scheduled to take place from September 7 to October 2, with a focus on how additional and comprehensive risk assessments could support forward-looking and preventative foreign and security policy.

The Maldivian foreign minister also participated in the BCSC 2019, delivering remarks on the theme ‘Climate Change and Displacement’.

Although Maldives has been at the forefront of climate advocacy since 1987, former president and current Parliament Speaker Mohamed Nasheed himself appealing to the international community at COP24 in 2019, a number of Maldivians hold the opinion that across administrations, government attitudes on the matter remain slack.