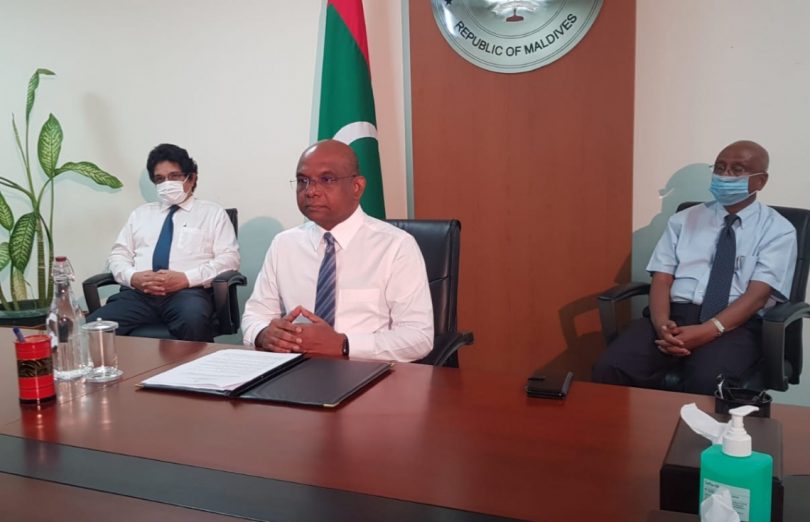 Ministry of Foreign Affairs, on Monday, granted a plot in the Hulhumale’ Diplomatic Enclave to the High Commission of Pakistan in the Maldives.

Foreign Minister Abdulla Shahid presented the official documentation to the designated High Commissioner from Pakistan to Maldives, Ather Mukhtar, in a virtual meeting held at the Foreign Ministry.

A total of 12,000 square feet of land was allocated from the Diplomatic Enclave for the construction of Pakistan’s Diplomatic Mission in the Maldives.

Former President Abdulla Yameen Abdul Gayoom’s government initially decided on handing over 3,000 square feet of land from the Diplomatic Enclave to Pakistan. However, Minister Shahid noted that the size of the land plot was increased to 12,000 square feet by the current administration.

In return, the Pakistan HC assured that the Maldives will receive a plot of land twice as large from the middle of the Diplomatic Enclave in Islamabad, the Pakistani capital.

According to the foreign ministry, plots from the Diplomatic Enclave are allocated under a ‘reciprocity’ policy, only to the countries that released land plots from within their territory to establish Maldivian consulates.

In addition to Pakistan, the government has so far granted land plots from the enclave to India, Sri Lanka, Bangladesh, China and UAE.

The Diplomatic Enclave is located in the second phase of Hulhumale’ to alleviate congestion in capital Male’ and to conveniently facilitate security measures for embassies located within close proximity to each other.