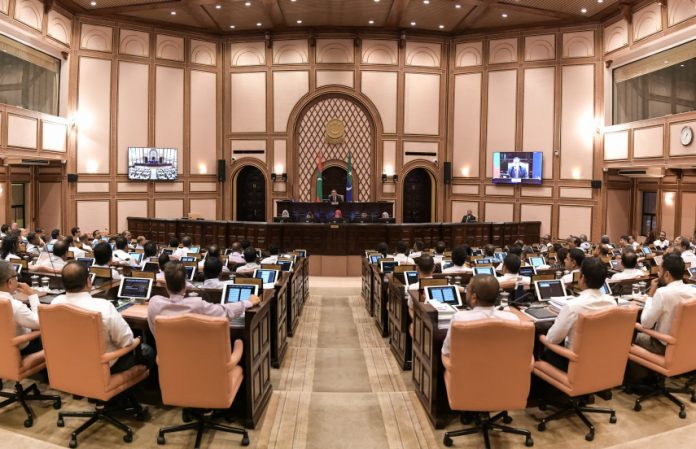 The pact, one of the very many signed between the two nations during Minister Jaishankar’s visit, provides for India building a dockyard at Uthuru Thila Falhu, for use by the host nation’s coast guard.

In a significant move of domestic political import, Maldives’ Parliament debated the even more significant bilateral ‘defence pact’ (?) signed when India’s External Affairs Minister (EAM) S. Jaishankar was in Male last week. Rather, the People’s Majlis discussed the need and demand for presenting the agreement papers to the House and to obtain the required approval, as mandated by the Constitution.

The pact, one of the very many signed between the two nations during Minister Jaishankar’s visit, provides for India building a dockyard at Uthuru Thila Falhu (UTF), for use by the host nation’s coast guard. “Glad to sign with Defence Minister Mariya Didi the UTF Harbour Project agreement. Will strengthen Maldivian Coast Guard capability and facilitate regional HADR efforts. Partners in development, partners in security,” Jaishankar tweeted. Amongst other occasions, India had done a lot on the Humanitarian Assistance and Disaster Relief (HADR) front in the Maldives, post-tsunami in 2004, and later during the drinking water crisis in capital Male at the end of 2014.

Government MPs used the occasion to defend the agreement. Speakers from the opposition PPM–PNC combines — identified with jailed former President Yameen Abdul Gayoom — submitted that it was not about the content of the agreement, but about the need for the MDP government of President Ibrahim Solih to obtain parliamentary clearance for the same. However, former Maldivian envoy to India, Ahmed Mohamed, went to town, claiming that the Yameen government that had invited India for the project, withdrew the same after New Delhi insisted on ‘exclusivity.’ He claimed that as Foreign Secretary, EAM Jaishankar was privy to the development.

Some Opposition leaders have since recalled how, for instance, President Yameen went through the motions of seeking a parliamentary nod before signing the controversial Free Trade Agreement (FTA) with China, during his near-secretive Beijing visit, once. This was because the Opposition-controlled Parliament had written in mandatory clearance as a pre-requisite, after then-President Mohammed Nasheed, now Speaker, fast-tracked the construction-cum-concession agreement with Indian infra major GMR in 2010. In an unprecedented manner, he subverted the spirit of the law by delaying his mandatory assent and granted the same after the GMR deal had been stamped.

All told, Parliament did not (have to) vote on the harbour-dockyard agreement as such. As per the Speaker’s ruling, the agreement copy alone was put up on the exclusive website for MPs, for them to read the contents. Indications, as also expectations, are that no one will ‘leak’ the contents to the media. Insiders claim that even the Yameen camp MPs are alive to the future possibilities, and recall how over-zealousness had cost the then-House Leader Ahmed Nihan’s entry into India when Yameen was in power (2013–18).

Yet, the debate is in the news for a different reason — a high number of MPs, adding up to 51, are demanding a debate on the defence document. In a House of 87, only 55 members, including the Speaker, were present when the Yameen camp, numbering just three, demanded the document. They had the support of 48 out of 65 ruling MDP parliamentarians. Three others abstained.

The projects included the US $500-million, 6.7 kilometres ‘Greater Male Connectivity Project,’ linking Male with two other islands — one of them, a proposed harbour-site and another a residential development aimed also at de-congesting the national capital.

Significantly, no MP has raised his or her voice when Minister Mariya Didi signed a more substantial defence cooperation agreement with the US, with minimum information shared with the nation close to six months later. The US agreement, as also the subsequent visit of then US Secretary of State, Mike Pompeo, later nearly coincided with the Opposition PPM–PNC combine, identified with jailed former President Abdulla Yameen, launching a ‘Go back India’ campaign, deriving from the massive Indian grant for infra projects.

The projects included the US $500-million, 6.7 kilometres ‘Greater Male Connectivity Project,’ linking Male with two other islands — one of them, a proposed harbour-site and another a residential development aimed also at de-congesting the national capital. In the midst of the campaign, the Yameen camp leaders met India’s Foreign Secretary Harsh Vardhan Shringla during his official visit, and sought New Delhi’s intervention, to have him freed from the forex-fraud case while in office. This time around, they met with Minister Jaishankar.

For all practical purposes, it’s a done deal for India — at a time when such reassurance is required in light of the neighbouring Sri Lankan government walking out of the three-nation ECT project which involved Japan too. Yet, eyebrows have been raised after 48 MDP parliamentarians, by themselves accounting for a House majority, technically joining hands with the Opposition — demanding a particular line of action from their own government leadership.

Going by the pulse of the party cadres, the Solih government is not as popular within the country as outside.