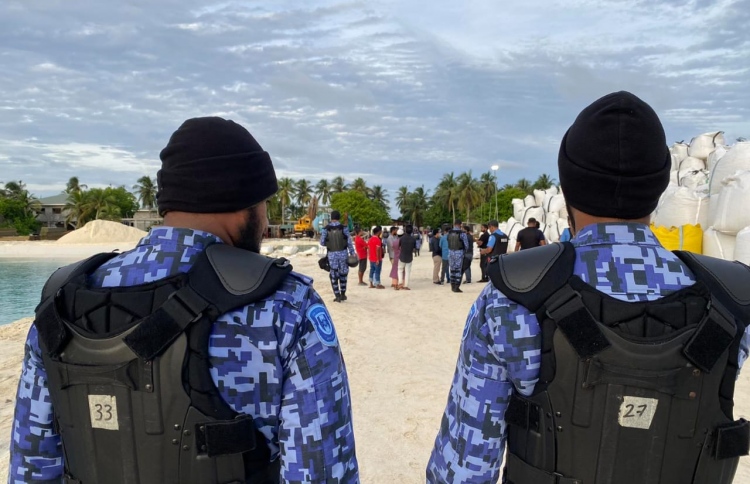 Police announced early Friday that the Maldivians held hostage on a developing resort in Baa Atoll were successfully rescued, while 19 expatriate workers were taken under custody.

According to the police, there were 13 Maldivian staff held captive instead of the initially reported 15. One of the staff escaped earlier by jumping into the sea and was rescued by the police.

The remaining 12 were also successfully located and taken under the police’s care.

A number of officers were injured during the police’s initial attempts to make landfall earlier on Thursday evening, when the expatriate workers prevented them from reaching the island by throwing stones and metal rods from the harbour.

One officer was rushed to Baa Atoll Health Centre with a serious head injury, while another suffered a broken finger. Several more officers sustained various other injuries as well.

The police then mobilised a ‘Public Order Response Team’ from its ‘Specialist Operations’ unit and an investigative team, headed by two senior officers, to deescalate the situation. They were accompanied by two officials from the High Commission of Bangladesh in capital Male’.

The Public Order Response Team successfully reached the island in the early hours of Friday, and the rescue operation was carried out without any further clashes. Police noted that following negotiations, the expatriate workers agreed to cooperate peacefully with the police.

Police also arrested 19 expatriate workers believed to be involved in the initial unrest on the island.

“There has not been any attempts to flee or such”, the police added, stating that the workers were acting in accordance with the officers’ instructions.

Scene of the Crime Officers and investigative teams, including the Human Trafficking Department and Serious and Organised Crimes Department, were mobilised to inspect the island and investigate the case.

The police further disclosed, along with photographs, that vehicles and equipment used for resort development were damaged and some buildings vandalised during the protest.

Police stated that they were investigating the case further.

As revealed by the police, the expatriate workers began to protest and held the local staff hostage after their employers failed to pay six months of unpaid salary.

The construction of the resort was contracted to a company owned by parliamentary representative for Shaviyani Atoll’s Milandhoo constituency, MP Ali Riza.

According to local media Mihaaru, the lawmaker admitted that there were unpaid salaries over a number of months as Seal Maldives, which had contracted Riza’s RIX Maldives to develop Bodufinolhu, did not make the payment. He added that efforts to settle the matter with Seal Maldives over the past few months did not yield results.

Concerns have long been raised by rights groups and the public over the exploitation of expatriate workers in the Maldives, including human trafficking, withholding of wages, poor living conditions, and other human rights violations.