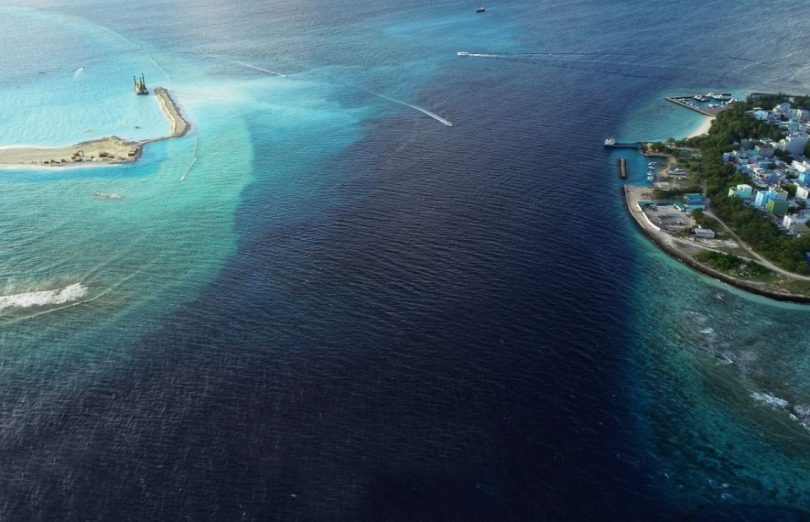 Maldives Police Service on Sunday, cautioned the public over a large number of plastic sheets, that were swept away by strong winds, releasing into and polluting the ocean near Gulhifalhu, Kaafu Atoll.

Approximately 20ft-long, the plastic sheets originated from the ongoing Gulhifalhu reclamation project and were spotted travelling adrift, headed northwest. All marine vessels in the area were advised to remain alert to the potential danger.

In response, environment advocates around the country raised concern that the risk to vessels is far outweighed by the danger such debris poses to the marine life that it may confront.

The government began reclaiming 30 hectares of land in the ‘Gulhifalhu’ lagoon on May 6, despite warnings from local NGO’s, citizen-led environmental campaigns and various other conservationists, who have all claimed the project would cause irreversible damage to an already fragile environment.

Awarded to Dutch dredging company Boskalis Westminster Contracting Ltd without the mandated bidding process, the project intends to facilitate the relocation of the Male’ Commercial Port to the industrial island of Gulhifalhu and create accommodation for 40,000 expatriates.

The move also raises concerns over living conditions of expatriates to be housed on the island. Each year, during the Southwest monsoon ‘Hulhangu’, toxic fumes from neighbouring garbage island Thilafushi engulf the islands of Gulhifalhu, Vilimale’ and Male’.

Local collective ‘Save Maldives’ called on President Ibrahim Mohamed Solih and the government to “stop the Gulhifalhu ecocide” and “re-think unsustainable, debt-funded development projects” to protect the environment and biodiversity of Maldives.

“The expected environmental loss and damage is already emerging, as sedimentation from dredging threatens the surrounding area including the Villimale house reef and dive sites nearby, impacting the livelihoods of divers, fisherfolk, resorts and other local businesses”.

Noting the arrival of a Dutch dredging vessel on June 1 for the project, Save Maldives stressed that the reclamation would result in the destruction of not only the reef but the Hans Hass Place, a marine area that was declared protected since 1995.