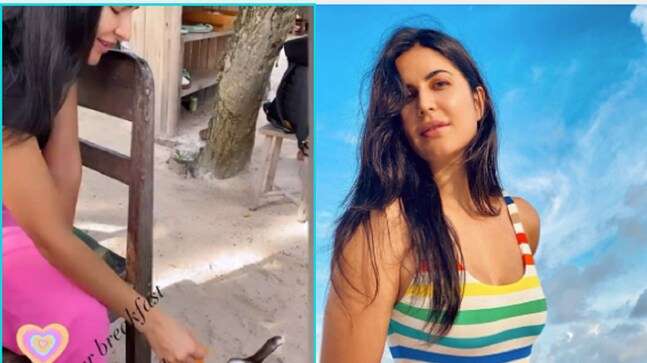 If you follow Katrina Kaif on Instagram you will know that she is in the Maldives currently. But unlike her friends and colleagues from the industry, the actress is not in the island country for a vacation. Katrina is busy with her work and that is the reason why she has jetted off to the Maldives.

Along with enjoying the tranquillity of the island country, Katrina Kaif is also enjoying the company of a four-legged fluff ball, a rabbit. She bumped into the rabbit while she was having her breakfast and she also treated him to some food from her plate. She shared videos on her Instagram stories and wrote, “Having our breakfast together (sic).” Katrina’s furry friend appears to quite like her company and this video is proof.

In the first photos that Katrina shared from the Maldives, the actress can be seen wearing a rainbow swimsuit. Her fans and followers on Instagram went gaga over her new no-makeup beach look. She looked absolutely stunning in the first pictures from the Maldives. It was there that she revealed the reason why she was in the island country. “So amazing to be in the Maldives for shoot #lovemyjob #grateful (sic),” Katrina captioned the photos. Though she revealed the purpose of her visit, the actress did not mention anything about the project which took her to the Maldives.

Though Katrina Kaif made her Bollywood debut with Boom in 2003, it was with Maine Pyaar Kyun Kiya? that the actress became a popular face in the industry. Katrina has appeared in several Bollywood films including, Namastey London, Partner, Apne, Yuvvraaj, New York, Ajab Prem Ki Ghazab Kahani, Zindagi Na Milegi Dobara, Jab Tak Hai Jaan, Ek Tha Tiger, among others. She was last seen in Bharat, opposite Salman Khan in 2019.

Katrina Kaif has Sooryavanshi and Phone Bhoot in the pipeline.