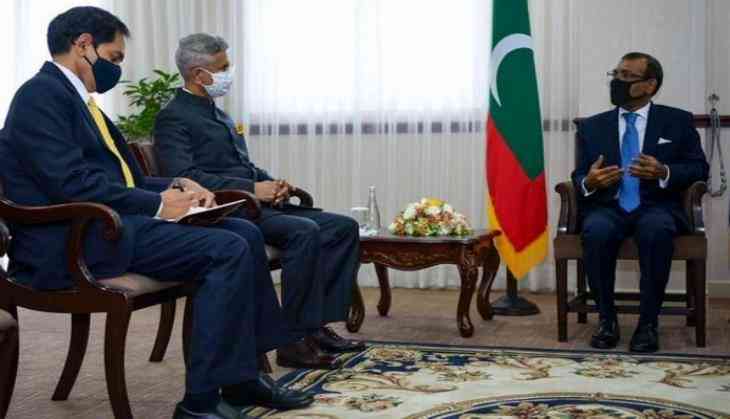 “Delighted to meet Speaker Mohamed Nasheed. As always full of ideas and energy. Told me that building democracy was a big project in the Maldives. And that India is a valuable development assistance partner,” tweeted Jaishankar.

Jaishankar is on a visit to the Maldives and will proceed to Mauritius on February 22-23.

Meanwhile, Maldivian President Ibrahim Mohamed Solih reciprocating to the bonhomie, said that it was a pleasure to meet Jaishankar and conveyed his thanks to Prime Minister Narendra Modi for assisting the Maldives during the coronavirus pandemic.

“Always a pleasure to meet my friend and Indian EAM Dr S Jaishankar. In our discussions today, I conveyed our thanks to PM Narendra Modi and the people of India for the generous assistance announced during the EAM’s visit including an additional 100,000 doses of Covishied vaccine,” tweeted Ibrahim Mohamed Solih.

Through the decades, India has rushed emergency assistance to the Maldives, whenever sought.

In 1988, when armed mercenaries attempted a coup against President Maumoon Abdul Gayoom, India sent paratroopers and Navy vessels and restored the legitimate leadership under Operation Cactus.

The Maldives holds strategic importance for India under the Prime Minister Narendra Modi government’s Neighbourhood First’ policy due to its location in the Indian Ocean. However, the relation between the two countries was strained under the pro-China regime of their former President Abdulla Yameen.

Moreover, EAM Jaishankar reiterated India’s support for a greater role for the Maldives in multilateral affairs stating that the Maldivian Foreign Minister Abdulla Shahid is “best equipped” to be the President of the 76th session of the UN General Assembly.

The Maldivian foreign minister, in his remarks, compared India-Maldives relations to the “synchronised motion” of two wings of a bird.

“A bird in flight, stays true on course, with not one but two wings in synchronized motion. Our two countries are just like those wings. We work in harmony, we work together, with the same interests, aiming to reach the same destination,” he said.