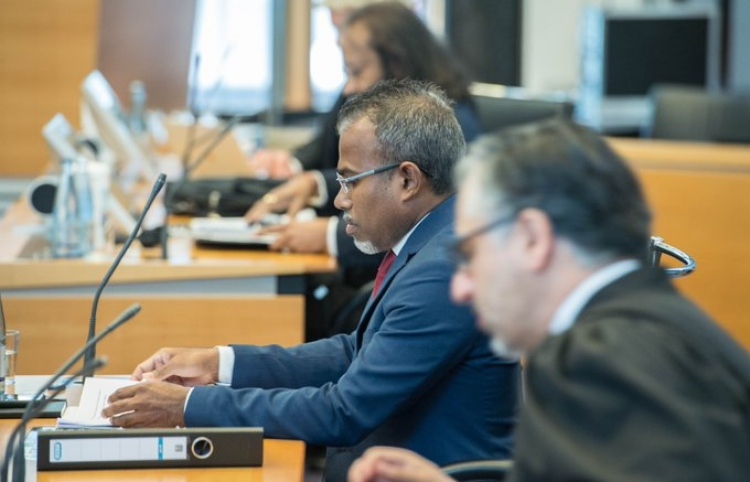 The International Tribunal for the Law of the Sea (ITLOS), on Thursday, decided to investigate the dispute concerning the delimitation of the maritime boundary between Mauritius and Maldives.

Finalised at a hearing held concerning the procedural objections presented by the Maldives in 2020, the decision entails that the tribunal will reach a conclusion on the disputed area in the Exclusive Economic Zones (EEZ) of Mauritius and Maldives on the basis of international laws.

It was highlighted that ITLOS would follow the principle of equidistance, the legal concept that a country’s maritime boundaries be established on a median line that is an equal distance from the shores of neighbouring nations.

During the second round of oral pleadings for preliminary objections regarding the dispute in October 2020, Attorney General Ibrahim Riffath and Deputy Attorney General Khadheeja Shabeena argued that ITLOS did not possess the jurisdiction to investigate the delimitation issue which was lodged by Mauritius.

In addition to requesting ITLOS to conclude that it did not have the authority concerning the issue, AG Riffath urged the tribunal to declare that the claims lodged by Mauritius were inadmissible, based on the oral and written statements provided by the Maldives.

Furthermore, Riffath stated that Mauritius had only submitted the delimitation case concerning the Maldives as a pretext for resolving an ongoing sovereignty dispute with the United Kingdom (UK) over the Chagos Islands.

He stated that the issue at hand arose due to differences regarding the advisory opinion issued by the International Court of Justice (ICJ) in February 2019, calling on the UK to end its administration of the Chagos Islands as swiftly as possible on the basis that the “process of decolonization of Mauritius was not lawfully completed” after the state gained independence in 1968.

In May 2019, the United Nations General Assembly (UNGA) held a vote over the matter, resulting in 116 countries voting against continued UK control over Chagos. While 56 countries abstained from the vote, only six countries backed the UK, which includes the United States, Hungary, Israel and Australia.

In the event that the Chagos islands are reclaimed by Mauritius, the country’s 200-mile wide Exclusive Economic Zone (EEZ) extending from the Chagos Archipelago could cause a reduction of the Maldivian EEZ.

The UK failed to adhere to the non-binding six-month period set following the UNGA vote that demanded the British withdrawal from the Chagos Islands.

Asserting that the Maldives had no dispute with Mauritius, AG Riffath welcomed any efforts to enter bilateral discussions on the differing views concerning the advisory opinion and whether the issue could be directly submitted to the ICJ.

Reiterating Maldives’ desire to maintain close bilateral ties with both the UK and Mauritius, AG Riffath described the latter’s criticisms that the Maldives was condoning and abetting colonialism as “deeply unfair”.

The Chagos Islands became part of the new British Indian Ocean Territory in 1965 following an agreement with Mauritius. The UK then signed a treaty with the United States of America which permitted the latter to use Diego Garcia, the largest island of the archipelago, as a military base. Thousands of indigenous Chagossians were forcibly removed from the islands between 1967 and 1973.

Mauritius argues that the islands were given up in a bid to gain independence from the UK.