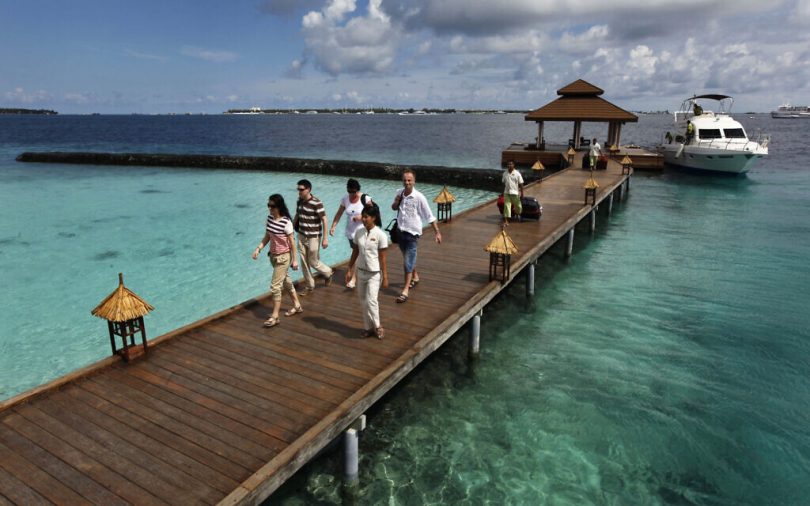 While almost all Israelis are stuck at home without the option of going out for work, school, leisure or entertainment, one family is stranded in a very different setting: vacationing and partying on a tiny, picturesque and almost deserted island in the Indian Ocean.

The Elimelech family flew out to the Maldive Islands on March 20, as the outbreak in Israel was gaining traction and as flights were being cancelled worldwide to stem the spread of the COVID-19 pandemic, according to the Ynet news site.

“We thought that within three weeks matters would return to normal, more or less,” said Nissan Elimelech, who flew with his wife and three kids, aged 10, 7 and 4. “I told my wife and the kids that we aren’t going on a vacation but on an adventure, we didn’t know what would happen.”

Their original return flight was for April 10, but it was cancelled, and several additional attempts to secure flights back to Israel have been unsuccessful.

After they spent two days at a resort, the local government told them they had to leave since the Maldives was closing its airspace and tourist resorts. But Russian airline Aeroflot cancelled their alternative March 29 flight back because only Russian nationals were being allowed to fly through or to Russia.

“Since there were other foreign families like us in the Maldives, who couldn’t be flown out… the Maldive government designated an island for all the ‘refugees’ from all the adjacent resorts with government subsidizing,” said Elimelech.

On April 2, the family found itself on a 5-star resort island called Olhuveli Beach with 150 other tourists, paying just $100 per night for a full-board stay with beach parties, water sports, kids’ activities and other benefits.

“There are daily activities, with alcohol and parties every evening,” Elimelech said. “It’s a small island with one resort. To walk around the whole island takes 20 minutes.”

“The Maldive government knows how to care for tourists,” said Elimelech. “On Friday the tourism minister came here and told us their culture was to treat tourists like kings. He calmed us down and said they managed to beat the virus and that the country was completely clean.”

The Maldives has confirmed a total of just 20 coronavirus cases and no deaths, with most of the patients already recovered and no new infections recorded since April 1.

“When we arrived on the island we were told that we were coming as guests for an unlimited amount of time — a month, two months, six months or a year,” he said. “We are feeling in paradise. We said jokingly that we don’t want to return to Israel.”

Elimelech is the CEO of a medical equipment firm and is continuing to work as usual via electronic means.

The family currently has a return flight for May 1, but it is preparing for the possibility that it will be canceled as well.

“My friends are jealous,” Elimelech concluded. “I’m sending photos and my mother in Israel said it’s out of this world and that Israel feels like ‘coronaland.’ This is definitely the safest place to be.”