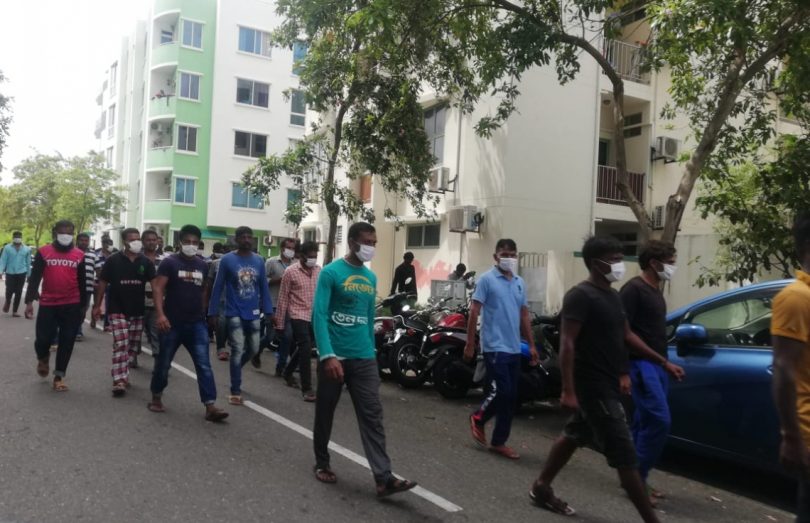 The order was issued after Island Expert revealed on Tuesday that some on-site equipment and vehicles were put up for sale to arrange the salary for migrant staff that were protesting over being forced to work for months without pay.

According to the Managing Director of the Thai company Anon Songpanya, selling off on-site equipment and vehicles will be difficult in the current economic conditions. However, he maintained his belief that it was the best solution at the moment.

The migrant workers were recruited to complete the construction work of flats in reclaimed suburb Hulhumale’ for MNDF and Police personnel.

Local media Mihaaru reported that SIFCO and POLCO had both addressed letters to Island Expert, informing the company to not sell off any capital owned by the police and MNDF companies.

However, no official statements have yet been publicised on the matter.

Admitting that the company was at fault, the MD added that no employees were paid after the lockdown was implemented.

“I believe it is wrong. I am trying to arrange that [the employee’s salaries] now. So I have put the equipment on-site up for sale now”, Songpanya said.

Songpanya attributed the delay in salary payments to numerous challenges posed by the lockdown amidst the ongoing global pandemic, adding that the company prioritised survival over paying wages.

Regarding the future of the housing project, Island Expert’s MD revealed that the process of subcontracting the remaining work on the flats to Rasheed Carpentry and Construction (RCC) Pvt Ltd subcontractor was nearly complete.

Construction work for the flats allocated for MPS and MNDF staff commenced in 2012, during former President Mohamed Waheed’s administration, but the project is yet to conclude.

Advance payments for the flats have already been deducted from the police and military personnel who are set to receive the flats upon completion.

Violations reported include that of including human trafficking, withholding of wages, poor living conditions, and other human rights violations. Further, the aforementioned low quality of life has cemented the disproportionate effect had by Maldives’ ongoing COVID-19 outbreak on its vast migrant population.