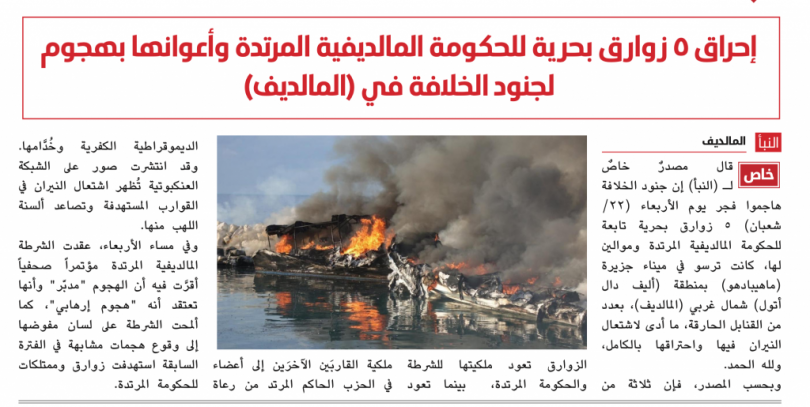 The Islamic State’s claim in the Maldives as seen in today’s Al Naba newsletter.

Earlier today, the Islamic State claimed its first-ever attack in the small island nation of Maldives. While the reported operation did little in terms of damage, it does represent the further spread of the group’s violence.

In its weekly Al Naba newsletter, the Islamic State reported that “an exclusive source told Al Naba that yesterday morning soldiers of the Caliphate attacked 5 boats belonging to the apostate Maldivian government.”

The newsletter continued by saying that the docked boats were burned on Mahibadhoo island in the Maldives’ Alif Dhaal Atoll. Little additional information is given other than repeating what Maldivian media has reported.

According to local outlets and authorities, five boats were indeed burned on the island yesterday. Local authorities have referred to the attack as “arson” and “a retaliatory attack for recent investigations into drug trafficking and religious extremism.”

While today’s statement is the first officially claimed attack in the country, it is not the first Islamic State-linked operation in the Maldives. Earlier this year, three people were arrested after stabbing two Chinese citizens and one Australian national on Hulhumale island.

A local cell reportedly claimed the operation in the name of the Islamic State, but the group did not pick up and amplify that claim.

While late last year, Maldivian authorities arrested an Islamic State recruiter whom the United States said: “mobilized fighters for IS in Syria and Afghanistan.”

In the Treasury Department’s designation of Mohamad Ameen, they noted “Ameen was actively engaged in leading ISIS recruitment through his close lieutenants.  Ameen’s subordinates were holding roughly 10 recruitment sessions per week under the guise of Islamic classes at several Malé, Maldives-based locations.”

Treasury also noted that “Ameen and his group continued to recruit on behalf of ISIS from various Maldivian criminal gangs.”

Given the amount of Maldivian jihadists that travelled to Syria to join the Islamic State and the former Al Nusrah Front, the then-al Qaeda branch in the country (now known as Hay’at Tahrir al Sham) and even al Qaeda in Pakistan, it was only a matter of time before the violence returned to the island nation.

It is unclear if yesterday’s attack represents a new sustained front for the Islamic State, but taken in context with additional recent events it is clear the group is trying to make inroads in the country itself.