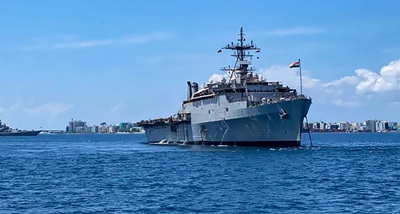 As part of Samudra setu mission, Indian navy ship INS Jalashwa will sail again from Maldives capital of Male this Friday bringing back residents of Kerala and Lakshadweep. The ship had earlier brought back 698 Indian nationals to Kochi on Sunday. The ship, in its second ferry, was scheduled to bring people to Tuticorin but the destination was changed since necessary approvals from Tamil Nadu government were not received.

[email protected]. The high commission said that priority would be given to those facing deportation by Maldives government, medical emergency, pregnant women, elderly, stranded tourists and people affected by family emergencies like deaths. A total of 900 people have been already evacuated from the Maldives with the second ship INS Magar expected to reach Kochi today. The ship is carrying 202 Indian nationals including 24 women and a patient.