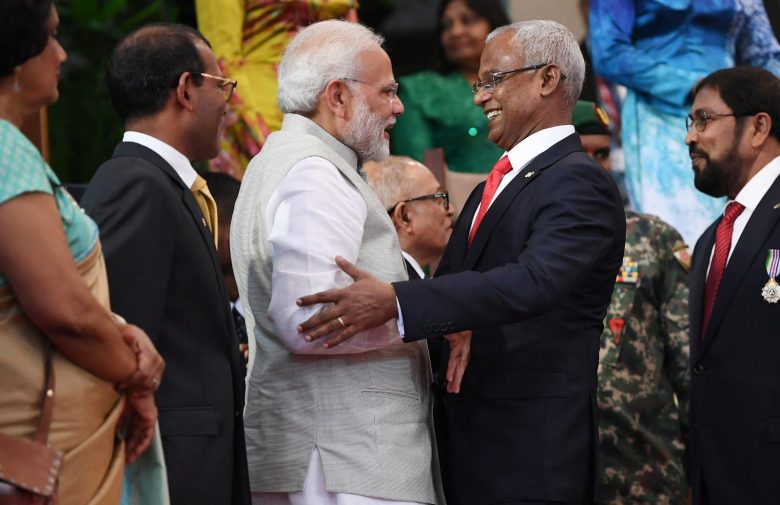 CALCUTTA – When India dispatched a battalion of para-commandos to the neighbouring Maldives to put down an attempted coup in November 1988, the intervening soldiers were by and large welcomed by the island state’s residents.

Fast forward to the present, Maldivians are protesting vociferously against India’s military presence in their island nation, with rising calls for Indian troops’ unconditional and immediate departure.

In recent days, Maldivians have taken to social media and hit the streets over what they see as a possible Indian threat to national sovereignty. Anti-India sentiment has also proliferated on a #India Out hashtag that has gone viral over social media.

On September 12, the Patriotic Youth Movement of Maldives organized a peaceful motorbike rally – the second such event in recent weeks – to protest against India’s military presence on Maldivian soil.

Hundreds of youths and college students participated in the gathering, reportedly held in compliance with the government’s Covid-19 guidelines. The police, however, cracked down hard on protesters, arresting over 41 including women and bystanders.

It wasn’t supposed to be this way under President Ibrahim Mohamed Solih, who was elected with 58.4% of the vote in 2018. Widely perceived as pro-Indian, Solih beat out Abdulla Yameen Abdul Gayoom, who had prioritized closer ties with China.

Rising anti-Indian discontent has been triggered by a chain of events in recent years.

Those include India’s ruling Bharatiya Janata Party’s outspoken advocacy for a forceful intervention in the Maldives’ domestic affairs, including a potential military intervention to safeguard Indian nationals from perceived threats.

Meanwhile, ex-Maldivian president and current People’s Majlis Speaker Mohamed Nasheed’s call for the deployment of Indian troops on Maldivian soil, to rescind a declared state of emergency and release political and legal detainees backed in 2018,  has also stoked anti-Indian fires.

As has the formalization of a new agreement, implemented by incumbent leader Solih, that will allow for Indian court adjudication on issues in the Maldives that impact on Indian economic interests in the island nation.

The agreement seeks to mitigate the risk of premature cancellation of contracts, including for infrastructure development, as has happened in the past with a change in administrations.

“India likely insisted on this recent agreement about the settlement of disputes in Indian courts to make it harder to terminate deals being made now,” says Hussein Shareef, a minister in an earlier Maldivian government that annulled a US$511 Indian-invested airport deal in late 2012.

Still, India clearly does not intend to lose its strategic foothold in the Maldives, particularly as geostrategic competition heats up with China in the Indian Ocean region.

The Maldives has long been an integral part of India’s regional security grid, seen in the two sides’ joint radar network, reconnaissance capabilities and military exercises.

India permanently stations two helicopters and a Dornier surveillance aircraft in the Maldives to bolster its threat detection and response capabilities under a long-standing bilateral defence pact.

India has also helped to establish a constellation of coastal radars – aligned with its own grid – on all 26 Maldivian atolls to monitor approaching sea vessels and aircraft.

But the Indian reconnaissance aircraft and choppers’ deployment, along with the military personnel who operate and maintain the assets, is increasingly viewed with suspicion in the Maldives, with conspiracy theories circulating the presence is a prelude to Indian annexation of Maldivian territory.

“During our year-long deployment, we did earn the goodwill of the (Maldivian) people mainly through correct military behaviour, (and) training the then-National Security Service, while keeping a low profile,” says Bhatia, adding, “we ensured respect for their culture and way of life.”

Yet an ex-Maldivian government servant in Male says frustration with India’s military presence is rooted deeply in history.

He notes that no external power was allowed to station at any military base across the country’s strategically-located atolls following the withdrawal of British troops in 1976 and that only India continues to have a boots-on-the-ground presence.

A Maldivian aviation expert, formerly attached to the government, told Asia Times on condition of anonymity that the Indian choppers stationed in the Maldives were at first presented by New Delhi as a gift in 2013, a gesture he recalls was welcomed at the time in Male.

At that time, Maldives sought to expand its military aviation capabilities but lacked the wherewithal. Indian pilots agreed to operate the equipment until Maldivian personnel could be trained.

Perhaps to ease tensions, the Indian Navy said in a statement this month that it had provided the Maldives National Defense Force (MNDF) on September 29 with a Dornier aircraft, as per an intergovernmental agreement.

The aircraft will reportedly be based in the northern Maldivian base of Hanimaadhoo and nominally be operated, commanded and controlled by the MNDF, with the Indian government bearing the aircraft’s operating costs.

The statement said seven Maldivian pilots, observers and technical personnel have been undergoing training to operate the aircraft since June 2017.

In a rapidly shifting geopolitical climate, aggravated by Sino-Indian competition for influence in the Indian Ocean, Maldives clearly needs to strengthen its airpower capabilities through the acquisition of modern armaments.

The Dornier aircraft will reportedly be used to protect the Maldives’ exclusive economic zone against illegal fishing and drug traffickers and will be deployed in future for humanitarian assistance and disaster relief.

Past Indian procurements, however, have proven problematic. Critics say the Nasheed government failed to scrutinize Indian helicopters’ suitability in Maldivian conditions after having agreed to receive the aircraft in 2010.

With their inability to fly at night or in inclement weather, Shareef argues, the administration failed to appropriately modernize the military’s aviation capabilities while leaving the door open for Indian troop deployments.

With its 1,000 plus islands stretching 800 kilometres into the Indian Ocean and straddling crucial sea-lanes through which 40% of the world’s fuel shipments flow, the Maldives is significant to both New Delhi and Beijing.

For most of its independent history, since 1965, Maldives has generally enjoyed excellent relations with India, while keeping communication channels open with China.

More recently, however, China has made new inroads into the Maldives by funding big-ticket infrastructure projects including major island-connecting bridges that have arguably narrowed India’s earlier edge.

Whether the current anti-Indian sentiment being expressed in the streets of Male is a game-changer is not yet apparent. But already there is speculation that Solih’s government is quietly bidding to rebuild ties to China to financially assist its Covid-devastated economy.

While the Maldives may lack resources, it still has strategic leverage situated at the epicentre of an emerging new great game between China and India for dominance of the Indian Ocean.