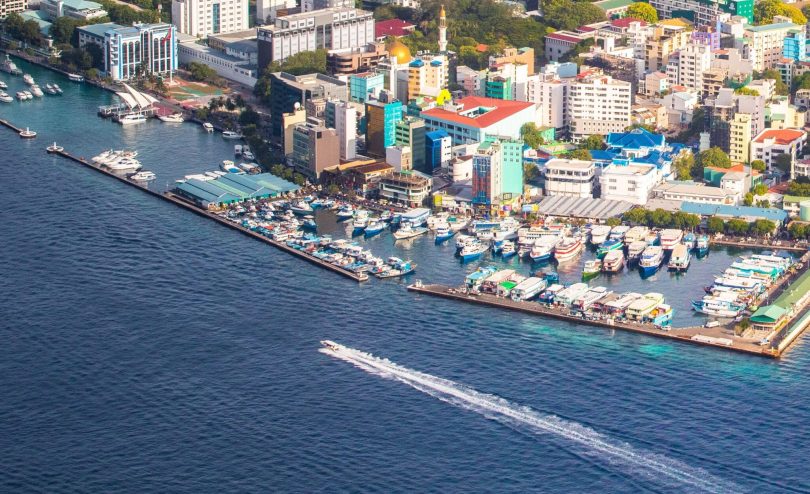 India’s progress in the Maldives may be good for both countries, but it would do well to recognise that China’s influence in the island republic is going nowhere fast, Balachander Palanisamy writes.

In August 2020, the government of India extended $500 million in aid to buttress a connectivity project in the Maldives. The package consisted of a $100 million grant and a $400 million line of credit, and the loan is intended to build bridges and causeways connecting the country’s mainland capital with its many islets.

Importantly, the project is touted to be bigger than any Chinese funded project in the Maldives. The loans are an effort at normalising ties with the Maldives, a country that has habitually oscillated its support between India and China. Currently, the pendulum has swung towards India but closeness between them does not portend Chinese influence to dissipate in the Maldives.

Between 1978 and 2008, under Maldives’ former President Maumoon Abdul Gayoom, India enjoyed favourable ties with the country without significant interference from China. Such an exclusive relationship ended when Maldives governments under Presidents Mohammed Waheed Hassan and Abdulla Yameen welcomed Chinese investments and undertakings in its economy and beyond.

In 2012, the Waheed government borrowed $500 million from China, and closeness between China and Maldives became even clearer when they inked a military aid agreement in the same year.

As the Maldives inched closer to China, it simultaneously moved further from India’s sphere of influence. The governments during that period sometimes acted in antagonistic ways towards India. For example, the Yameen government in 2018 decided to return two Dhruv helicopters that were gifted by India to the coast guard.

The Maldives government also criticised India’s tendency for military intervention as an affront to its sovereignty and its ambition to engulf the island when domestic politics becomes unstable.

From late 2018 onwards, a change in power brought reprieve to strained diplomatic ties between the two countries. The present democratically elected regime led by Mohamed Solih backtracked on deals such as a free trade agreement made with China by the previous government.

However, India’s inroads in the Maldives do not mean China’s influence will necessarily recede. China still has several ongoing projects in the Maldives which will continue to keep the economy buoyant as the tourism industry struggles.

It is likely that China will continue to work with the new leader unfazed, as it has done with Sri Lanka’s president. China’s largesse for developing countries transcends domestic politics.

Both governments in the Maldives and Sri Lanka were elected on the promise of eradicating corruption by government officials and reducing debt accrued from China’s loans. But both governments also resumed Chinese projects after briefly halting them, fearing the economic cost.

It is now much appreciable of India’s aid. In December 2018, when Yameen’s government exited, India gave $1.4 billion to the Maldives to offset Chinese loans. The news of these low-cost loans drew the ire of Chinese leaders.

Indian loans are carefully aimed at nurturing local jobs and accepting local partnerships at personal and national levels. This assistance will allow the Maldives to make its own independent decisions regarding the projects it wishes to undertake.

The aid comes at a critical moment as Maldives’ biggest industry, tourism, is suffering from the impacts of the COVID-19 pandemic. The financial package, together with several deals either in the pipeline or waiting to be finalised, will jumpstart the tourism industry.

Financial aid in civic infrastructure projects aside, India has proven to be a reliable and trustworthy partner for the Maldives especially in times of disasters, and it views itself as being responsible for aiding its neighbour in times of crisis.

During the 2004 Tsunami that severely affected the Maldives for instance, India contributed significant relief and aid to the country.

Recently, a similar dedication was shown during Maldives response to COVID-19, by delivering goods such as medical items immediately, despite strained bilateral ties.

In 2014, when Yameen’s government was identifying with China, India also provided large quantities of drinking water to the capital Male when its desalination plants were burnt. Clearly, India has a robust track record in providing necessities and aid to its partners in the Indian Ocean.

Still, India should accept that China’s influence in the Maldives is likely to remain immutable. This doesn’t mean it should discontinue its work, and India’s inroads into the Maldives need not trigger a zero-sum game with China.

Rather, both major powers should compete for relative gains in the Maldives, a situation that can allow the country to get the best deal it can from each of its larger partners.

For Maldives’ part, alienating either power is not an option, especially when its economy is recovering from the pandemic. Both India’s financial aid and humanitarian assistance go a long way to restoring ties between the two countries, and this is good for both governments.

Still, Indian policymakers will have to accept that simply ramping up spending won’t be enough to ease China out of the island nation, and a long-term strategy to engage with the Maldives is the only way forward for it in this space.