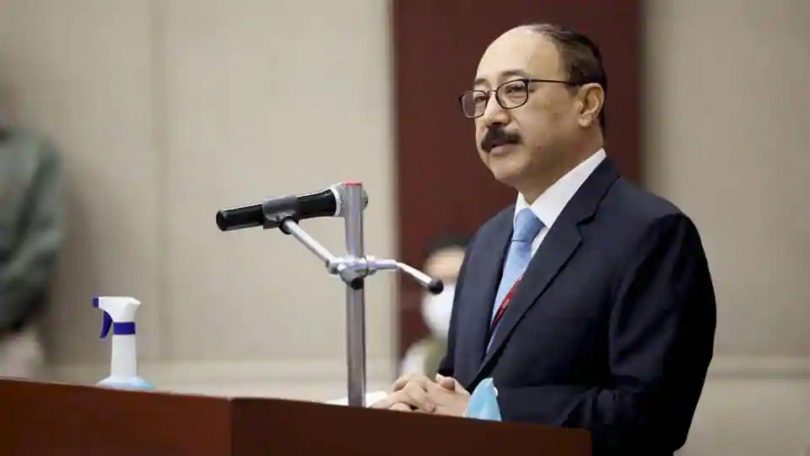 Male, Nov 9 (PTI) India on Monday handed over to the Maldives government children’s parks for 67 islands as part of its commitment to support the country’s infrastructure, broadening the economic base, making the economy more robust and resilient and acting as a catalyst for development.

On the occasion, Foreign Secretary Harsh Vardhan Shringla, who is here on a two-day visit, said that the gifting of children’s parks for 67 islands is a good example and the islands which will benefit are dispersed from the north to the south.

“The smiles it will bring to the children and their parents cannot be described in words,” he said.

He said that India is the Maldives’ closest neighbour and friend and it is committed to the country’s development.

The projects range from large investment projects to High Impact Community Development Projects (HICDP), meant to have an immediate and positive impact on the lives of the island communities, he said.

As these projects are driven by the needs of communities on the islands, they will further promote the local economy and contribute towards creating job-opportunities in the islands, he said.

In the last two years, the Maldives has seen the fruition of key development cooperation initiatives taken during the State Visit of President (Ibrahim) Solih to India in December 2018 and subsequent high-level engagements, Shringla said, adding that the financial package of USD 1.4 billion announced during the state visit, as well as projects funded by the HICDP grant and cash grant announced last March have now become a reality for all to see.

“Since then, the Indian government has provided additional assistance of USD 500 million for the Greater Malé Connectivity Project (GMCP). This project which will connect Malé with Villingli, Gulhifalhu and Thilafushi through bridges and causeways, will become a new economic lifeline for the Maldives. It will link capital Malé, with the new commercial port at Gulhifalhu, also being funded under an Indian Line of Credit, and the Thilafushi industrial zone,” he said.

Honouring the democratic traditions cherished by both countries, the underlying principles of India’s development cooperation of transparency, competitive pricing and ownership of the host country will be adhered to in the implementation of the GMCP project, he said.

India’s development projects in the Maldives are demand-driven and will involve the Maldivian government at all stages. The tendering process and award of contract will also be done by the Government of Maldives, the Foreign Secretary said.

“We are committed to the speedy implementation of the projects. We are already in the middle of completing procedures for the Line of Credit USD 1.2 billion projects,” he said.

“The coronavirus pandemic has caused widespread disruptions, but I am happy that even COVID-19 could not stop or slow down India-Maldives cooperation. President Solih has himself publicly pointed out that India has been the largest supporter and assistance provider in dealing with the pandemic,” Shringla said.

Last month, India provided USD 250 million financial assistance, as a concessional loan, leaving it entirely to the Maldives government to decide its usage in accordance with its priorities.

“It is reassuring that when we emerge from the pandemic, we will emerge together with our partnership stronger than ever before. We will work together with you to mitigate the socio-economic impact of COVID-19. We have striven to ensure that there are no disruptions in our support to Maldives as was seen in the case of the continued supply of onions even in the wake of export restrictions imposed by India for others,” he added.

Prime Minister Modi has stated that India will produce an affordable and accessible vaccine for all its partners and friends and in this, as a close neighbour and friend, it will accord priority to the Maldives, Shringla said.

“I am pleased to announce that whenever a vaccine is developed in India, we will share it with the Government of Maldives. Needless to say that this is a continuation of the spirit of bilateral relationship based on friendship, mutual trust and respect and India will continue to be the first responder to any emergency situation in the Maldives since decades,” he said.

India has been involved in coaching Maldivian sportsmen in different games and has also commenced a comprehensive cricket coaching programme for the cricketing talent, he said.

“I am informed that coaching sessions for the coaches and umpires have already taken place and coaching of your 30 member men’s and 30 member women’s team will commence soon in Chennai. The state-of-the-art cricket stadium being built in Hulhumale, along with a coaching centre, will further boost cricketing talent in the Maldives.

“I hope that an IPL match can be hosted in the Maldives in the near future,” Shringla said as he congratulated the Maldives for being selected as the host for the Indian Ocean Island Games in 2023.

He said that both India and the Maldives have placed an abiding faith in democracy and India stands with the Maldives on the chosen path of democracy, to assist its democratic journey.

“The end beneficiaries of Indian projects, big and small, are the people of the Maldives,” he added.