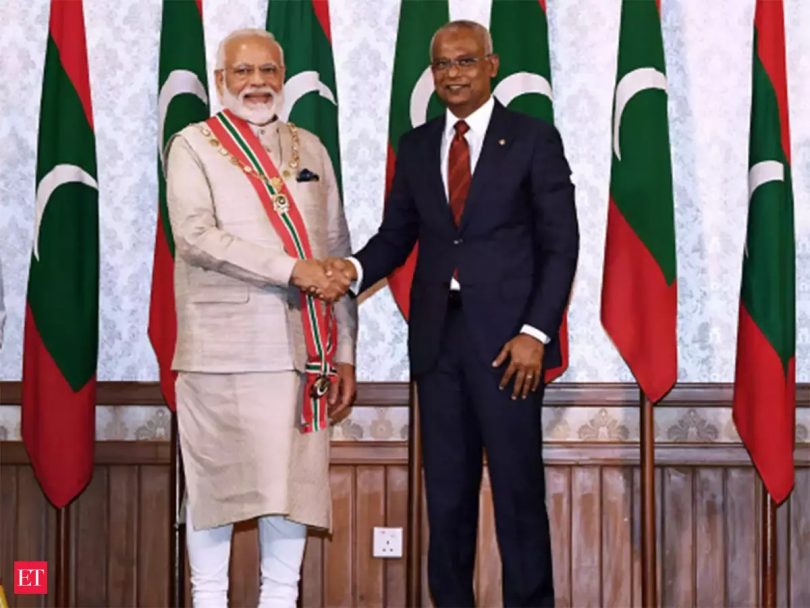 NEW DELHI: India is not just assisting its Southern neighbour Maldives with development projects but also providing support for its security-related infrastructure.

A ceremony to mark the completion of Police Training Center in Dh. Vaanee was held on last week at Iskandar Koshi, Male’.

The Maldives Police Service(MPS) executed the project through a cash grant assistance of MVR 8 million from India.

This project is part of the 29 grant projects covering different facets of Maldives-India cooperation that are being implemented across the Atolls with total Indian grant assistance of about MVR 200 million i.e $ 12.6 million.

The High Commissioner extended his best wishes to Maldives Police Service on completing 16 glorious years of service as a civilian policing organization. He congratulated MPS on successfully implementing the project. He emphasized that it was a hallmark of India’s development cooperation is that the High Impact Projects are entrusted to local institutions and agencies to implement so as to also build their capacities and own the projects in the true sense.

Sudhir remarked that it was a matter of great honour that several officials from the MPS have trained in India, including Commissioner of Police Mohamed Hameed who is an alumnus of India’s premier Training academy for police – the SVP National Police Academy in Hyderabad.

Sudhir referred to the Video conference meeting held between EAM Dr S Jaishankar and Foreign Minister Abdulla Shahid on Aug 13, during which several concrete initiatives were announced to support Government of Maldives to tide over the Covidcrisis. These included starting the Air Travel Bubble to boost tourism which has commenced on August 25 with 3 weekly flights between our countries. HC Sudhir noted that this was the first Air Bubble India has with its neighbours in South Asia.

He conveyed that the Direct Cargo Ferry Service between India and Maldives would commence later this month. He further shared that the LoC of $400 mn and grant $ 100 announced for GMCP would be the largest connectivity project in the Maldives. He also mentioned that a large financial assistance package had been announced for GOM to deal with economic difficulties arising due to COVID.

Several grant project-related ceremonies have been held in the last two months. The Fehendhoo-Goidhoo student Ferry was formally handed over in an event held in Male’ on 8 July. Outdoor Gym equipment for 61 islands across the Maldives was handed over in a ceremony held on 13 July. Vehicles and machinery procured through Indian grant assistance were handed over to Male’ City Council on 23 August. Ground-breaking ceremony for development of the Central Park and renovation of the arrival Jetty in Hulhumale’ was held on 27 August. As regards India’s High Impact projects in Addu, contracts have been awarded by the Addu City Council for setting up of 3 Fish-processing plants and 5 eco-tourism zones in Addu city. Work is progressing well on setting up of a bottled-water plant in Hoarafushi. We look forward to the inauguration of the Rasdhoo Coastal Protection project and Kolhufushistreetlights project in the coming days.

India is associated with the Development of Phase II of the Dh. Vaanee Police Training Center, which will focus on providing specialized operational training to Maldivian police personnel, according to an official statement.

This project complements India’s largest grant project in the Maldives under grant assistance of $ 30 million – the Institute of Security and Law-Enforcement Studies (ISLES) in Addu, which will serve as a general Training Center for the Maldives Police personnel. India-Maldives traditionally share close linkages in the field of police training and capacity building. Our cooperation has continued regardless of the challenges posed by the global Covid pandemic. Recently, 9 officers from the Maldives Police Service participated in an e-ITEC course conducted on ‘Policing during the pandemic’ in August 2020.

The project components funded under India’s grant for the Vaanee Police Center include a Reverse osmosis plant, Rappelling tower, Swimming track, Gymnasium, Gym Equipment and Vehicles. India is honoured to contribute to the overall enhancement of training facilities available for the Maldivian police personnel, which will further strengthen the police force and enable them to perform their responsibilities to the fullest.

“This project is yet another shining example of the nature of the development partnership between India and the Maldives, which is transparent, participative and tailored to the requirements of the implementing agency on the Maldivian side,” according to an official statement.