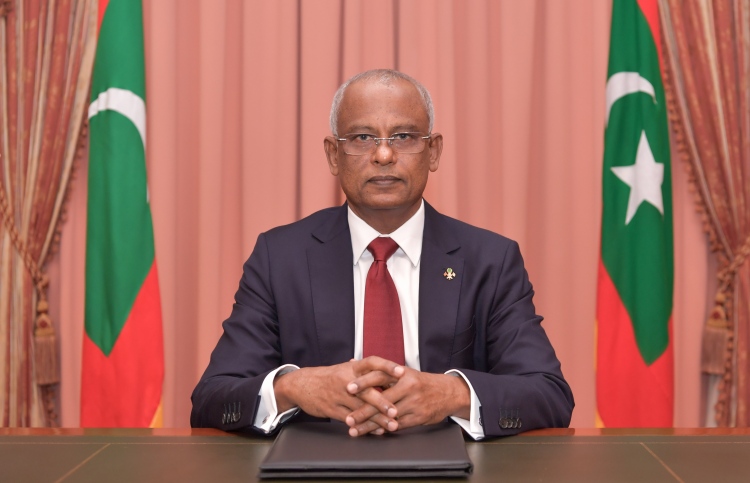 President Ibrahim Mohamed Solih, on Wednesday night, highlighted the necessity of increased youth and women involvement as the country moves to overcome the many challenges presented by the COVID-19 pandemic and especially with regards to reviving Maldives’ economy.

Delivering an address on the occasion of the Islamic New Year, President Solih acknowledged that Maldives is currently undergoing an extremely difficult period, with development crawling forward at a snail’s pace.

“I am sure that we can achieve economic recovery at our desired rate, should the roles of youth and women be amplified, in business and other economic activities”, he said.

Referring to the teachings of Islam, the president urged everyone to extend help towards their family members as well as the community. He added that respecting children, caring for women and helping elders were important lessons to learn from Prophet Mohammad’s (PBUH) migration from Mecca to Medina; a significant event related to the Islamic New Year.

It is particularly essential to practice these teachings during the current circumstances posed amidst the ongoing pandemic, President Solih said.

He further stressed on the importance of fostering and maintaining kinship amongst Muslims and working towards a common goal with a shared aim to achieve development and progress.

President Solih concluded his address with a prayer, requesting that the Islamic year of 1442 to be a joyous one, bringing prosperity and success to the global Muslim community, as well as the people of Maldives.

His statements were made at a time when public ire is at an all-time high, since he first took office in 2018, as negative sentiments grow louder fuelled by the government’s movements in various areas particularly that which is in contrast of electoral pledges made by the ruling Maldives Democratic Party.

Most recently, a compliance audit into the spending of the Ministry of Health and Ministry of Tourism on the Maldives’ COVID-19 response revealed several violations of the Public Finance Act, deceit and possible corruption involving large sums of public funds.

Just prior to that, in the months of June and July, a number of rallies were held by concerned citizens, advocacy collectives and opposition over a number of issues, including impunity for sexual offenders appointed to public office, lack of measures to ensure the safety of women and children and over its continued tolerance over severe mistreatment of expatriate workers in the country.

Though the president himself has previously acknowledged the exploitation of expatriates, of which a majority are Muslims, working across the island nation, he remained silent amidst the public uproar over various high-profile cases of alleged human trafficking, withholding of wages, poor living condition and other human rights violations that surfaced in the past few months.

With regards to his comments on female empowerment and children’s rights, President Solih has also failed to address the concern raised by advocates against gender-based violence and child abuse, including allegations of sexual harassment and bribery against his MDP-aligned Director of Communications Hassan Ismail, lodged at President’s Office, Anti Corruption Commission and Maldives Police Service by an editor of a local news outlet.

Despite repeated calls for action by the victim, advocates and institutions, both local and foreign, no measures were taken against Hassan Ismail, although the President immediately sacked former Tourism Minister Ali Waheed, representative of Jumhooree Party, over similar allegations, quoting the governments “zero-tolerance policy” on such matters.