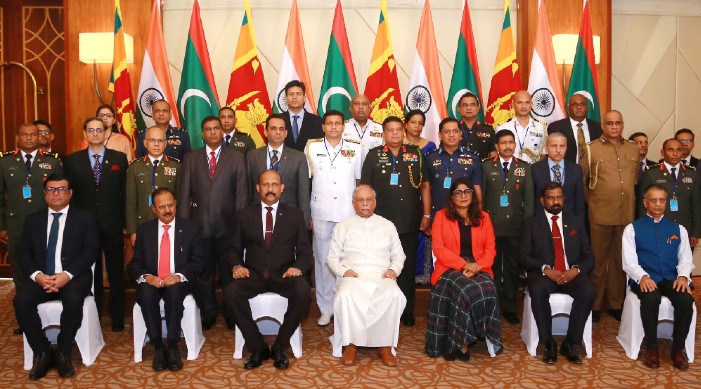 A trilateral secretariat for National Security Advisors (NSA) on Maritime Security Cooperation between India, Sri Lanka, and the Maldives was inaugurated on March 1, 2021. The secretariat was set up at the Sri Lanka Navy (SLN) Headquarters in Colombo in keeping with the discussions held at the fourth NSA level trilateral meeting on maritime cooperation in November 2020. The fully-fledged 24/7 operated secretariat is expected to facilitate non-stop communication between India, Sri Lanka, and the Maldives on the issues pertaining to maritime security in the Indian Ocean Region.

The NSA-level trilateral meeting on maritime security cooperation was inaugurated in 2011 in the Maldives. Second and the third meeting held in Sri Lanka in 2013 and India in 2014 respectively. Unfortunately, there was a halt in the meeting since 2014 mainly due to the deteriorating relations between India and the Maldives during 2014-2018. After the new administration under President Ibrahim Mohamed Solih assumed power in the Maldives in 2018, there has been a fresh impetus to resume the trilateral maritime dialogue. Realizing the topical necessity of the continuation of the meeting, the three countries held the fourth NSA level meeting on November 28, 2020.

Given the geo-strategic location of India, Sri Lanka, and the Maldives, the three countries share common maritime security threats and challenges posed by the evolving Indian Ocean security environment of the twenty-first century. The NSA-level meeting was designed to initiate collective action to deal with the common security threats and challenges in the maritime domain. In this context, during the second meeting in 2013, a roadmap for maritime security cooperation was agreed by the three countries which include initiating measures to enhance Maritime Domain Awareness (MDA), sharing of Automatic Identification System (AIS) and Long Range Identification and Tracking (LRIT) data; training and capacity building initiative in areas of MDA, Search and Rescue (SAR), Oil Pollution Response, as well as joint activities including trilateral exercises, maintaining lines of communication on illegal maritime activities, formulation of marine oil pollution response contingency plan, humanitarian assistance and disaster relief, and cooperation in legal and policy issues related to piracy. Newer areas of cooperation including hydrography, maritime and underwater heritage, training in Visit Board Search and Seizure (VBSS) operations, training on-board Indian Sail Training Ships, exchanges between think tanks, and joint participation in adventure activities were discussed during the third meeting in 2014. During the fourth NSA level meeting, all the three countries agreed to broad base cooperation by expanding the scope to improve intelligence sharing and include issues such as terrorism, radicalization, extremism, illegal drugs, weapons, and human trafficking, money laundering, cybersecurity, and effect of climate change on the maritime environment.

It was acknowledged in the fourth meeting that to ensure effective implementation of decisions taken at the four meetings, biannualDeputy NSA level working group meeting, cooperation at the operational level, intelligence sharing and enhancement and maintenance of maritime information management system, improvement of personnel capabilities, and cooperation on education and training among the three countries is crucial. In this context, setting up of the NSA trilateral secretariat was an important step. The secretariat can provide a 24/7 communication line among the three countries on issues of mutual concern in the maritime domain. The secretariat can be of particular use for sharing maritime intelligence on the illegal activities in the Indian Ocean among these three countries. It was suggested during the fourth NSA level meeting that the existing technology can be utilised for the purpose.

To collect information on maritime activities in the Indian Ocean, India has installed a coastal surveillance radar system (CSRS) all along Indian coastlines including Andaman and Nicobar Islands through its entire coastal belt. Additionally, India set up the CSRS in the Maldives, Mauritius, and Seychelles and AIS in Sri Lanka. Currently, the Information Fusion Centre (IFC), Indian Ocean Region Gurgaon fuses the white shipping information collected by the CSRS and the AIS and shares the information with all the countries that have signed the ‘White Shipping Agreement’. India has signed ‘White Shipping Agreement with around 26 countries including Sri Lanka and the Maldives. However, the Agreement does not include the provision for intelligence sharing. As per the ‘White Shipping Agreement’, member countries can share information only on merchant shipping activities in the region.

The NSA level trilateral mechanism provides for sharing maritime intelligence using the existing technology among India, Sri Lanka, and the Maldives. The newly set up Secretariat can facilitate maritime intelligence information sharing and benefit all the three countries to deal with their maritime security challenges coming from illegal activities at sea including, act of terrorism; piracy; drug, weapons and human trafficking, illegal, unreported and unregulated fishing; marine pollution and so on.Expanding the membership of the trilateral forum to include Mauritius and Seychelles would further strengthen the capability and capacity of this subregional groupingto deal with the maritime security challenges in the Indian Ocean. Commenting on the newly set up NSA secretariat in Colombo, Foreign Secretary of Sri Lanka, Prof. (Adm.) Jayanath Colombage said, “the entire world is benefitted with this initiative, as the Indian Ocean is the lifeline of the entire world.”

(The author is a Research Analyst, Manohar Parrikar Institute for Defence Studies and Analyses. Views expressed are personal and do not reflect the official position or policy of the Financial Express Online.)