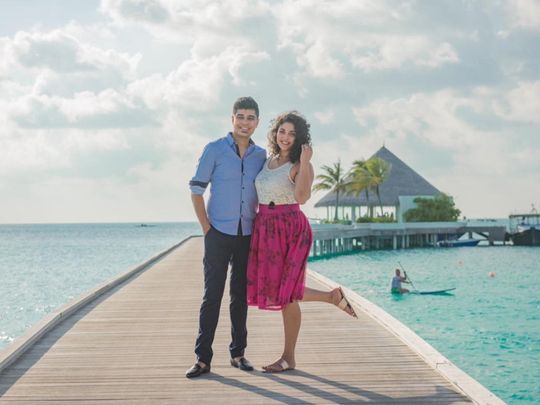 The Indian college sweethearts, who got married in December last year, had to cut short their dream trip shortly after due to a “family emergency”.

But little did they know that their second honeymoon trip now would get extended indefinitely, thanks to the flight suspensions amid the global COVID-19 outbreak.

‘The honeymoon is long over’

“Everyone’s been telling us how lucky we are to be on an eternal honeymoon on a dream island, which also happens to have only a few cases of coronavirus (19 so far, with 13 recoveries),” Ria told Gulf News on Zoom from her room at an idyllic beach resort located on the tip of South Male Atoll.

“But truth be told, it feels like the honeymoon is long over because we are very anxious to return home,” she said.

Rohan, who works as a trade development executive, said he and his wife were to fly back to Dubai on March 20, a day after the flight suspensions kicked in.

“By the time we realised there would be no flights after 12 noon on March 19, it was too late and we could not advance our return,” he said.

Stuck on the island now, Rohan said, “I did not bring my work laptop and can’t do much from here. My employer has been very supportive through this. I don’t know how long we will have to stay here and hope we can get back soon. Our families too are a worried lot.”

The couple said they had the option of flying out to their home countries when the flights to the UAE were suspended. “But that would have meant we went separate ways,” said Rohan.

“The Indian Embassy has been helpful but our situation is complicated as Ria is a Canadian passport holder and I have an Indian passport. We are both settled along with our families in the UAE and that’s where we belong,” he said.

With the resort they are in suspending all leisure activities as a COVID-19 precautionary measure, the couple said there is only that much they can do to keep occupied.

“It’s safe to say we’re done with the beaches. We exhausted the water sport options well before the restrictions came into place,” said Ria, longing for the comfort and familiarity of her country of residence.

Ria’s father, Rajeev Khandelwal, who joined the Zoom call from Sharjah, said, “We are very worried and are praying that they will be back with us soon.”

The couple are not the only honeymooners stranded in the Maldives. “There are many others like us out here,” noted Ria.

No doubt, honeymooning in a place like the Maldives has been a dream come true for them.

But as the days go by, the couple, who are appealing for help to fly back to Dubai, said the trip could turn into a nightmare if they are unable to return at the earliest.