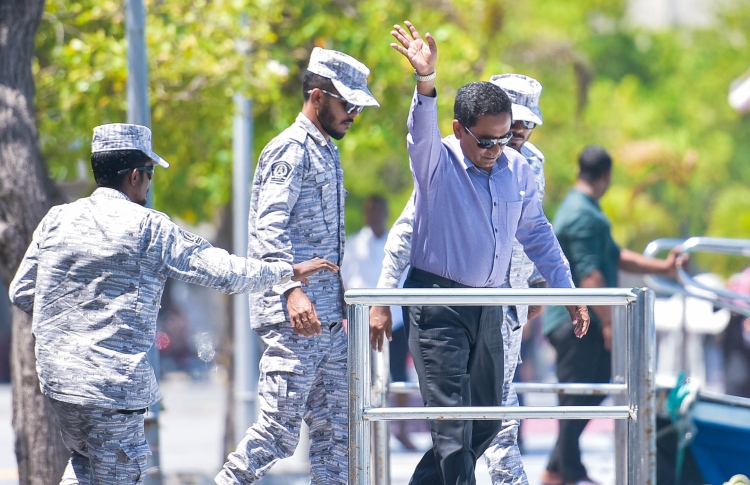 In a statement released on behalf of the ex-president’s family, his eldest son Zein Abdulla Yameen expressed concerns over the state’s interference in Yameen’s fundamental rights.

The statement noted that Minister Imran was speaking to the media in a way that painted Yameen’s right to legal representation and healthcare as “a game”, an “insensitivity” has caused psychological harm to Yameen’s family.

Condemning Imran’s narratives on the issue, Yameen’s family revealed that they would be pursuing legal action against the home minister.

Zein revealed that authorities did not allow the former president’s legal team to disembark their vessel and step unto Maafushi, Kaafu Atoll for a scheduled sit down with Yameen, stating that they lacked the Health Protection Agency (HPA)’s permit.

“Claiming that his lawyers can only meet him with the permission of unrelated [institutions] Health Protection Agency and Maafushi Council, is an injustice against an individual kept under state custody”, Zein wrote.

Moreover, the ex-president’s family called upon state institutions to ensure Yameen’s rights, dubbing the “mistreatment of a former president” an “unacceptable” act.

In December 2019, the Criminal Court sentenced Yameen to five years in prison and a fine of USD 5 million, on money laundering charges concerning the embezzlement of MVR 3.4 billion from Maldives Marketing and Public Relations Corporation (MMPRC).

The appeal process of his conviction was accepted by the High Court on December 18, 2019, and is ongoing. However, hearings at the High Court have also been delayed due to Yameen being unable to meet his representatives.

Opposition factions Progressive Party of Maldives (PPM) and People’s National Congress (PNC), in addition to Yameen’s lawyers have repeatedly raised concerns over the challenges for Yameen to conduct meetings with his lawyers. However, the home minister had asserted that there the meetings were not obstructed in any way.