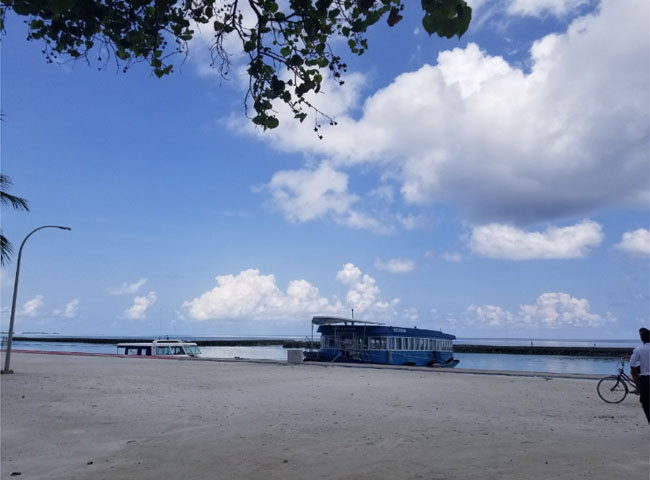 Though there are voluntary organisations that are working for people from India in the Maldives, Dr Rajakumaran says that aid is not reaching everyone in need.

When Dr Rajakumaran Mampuzha, a doctor from Kerala, was working as a Senior Medical Officer at a hospital in the Maldives, having a meal on a typical day would usually mean him walking into an affordable restaurant or hotel and buying it for himself. However, since the island country announced a 14-day lockdown on April 15, Dr Rajakumaran, who is stranded there has had to resort to desperate means to fill his belly.

“On the first day when the lockdown was announced, nobody had an idea this was coming. People like me who depend on hotels for food were left in the lurch. Once, I was forced to take a bite out of some leftover food from the waste bin in my room,” he tells TNM from Male, the capital city of the Maldives.

“Ever since the lockdown, things have been thrown completely out of gear. The lockdown was announced without arranging proper food or basic amenities for the people who are stranded in the country. Many stuck here now don’t have the security of even a single meal in a day,” he adds.

The Ernakulam native has also been seeing several migrant workers – most of them from India and Bangladesh – compelled to beg for food. “There was a look of anguish in his eyes,” he says, narrating one such incident. “He looked at me, and then, at the food packet, I held. We both didn’t say a word; I handed over the food packet to him and he hurriedly walked away.”

The 49-year-old doctor had finished his one-year contract at the Regional Hospital of Muli. However, he returned to the Maldives from Kerala on March 8 in order to write an exam and complete official procedures to continue working at the hospital. Due to delays, he had to prolong his stay in Male. On April 15, the Maldivian government announced a 24-hour lockdown due to the COVID-19 situation, which was later extended to a 14-day one.

According to Dr Rajakumaran, there are hundreds of migrant workers in the country who are mostly from south Indian states like Kerala and Tamil Nadu and also from Bangladesh.

“Most of these people work in hotels and construction fields. With no banks functioning, many are left without money in the lockdown,” he says.

Though there are a few restaurants which are kept open, all of them are very costly, he says, sharing a photo of the menu card of a restaurant charging about Rs 200 for a vegetable kurma.

“When my ordeal was reported in Kairali channel and Deshabhimani newspaper, the officials of the Indian Embassy here contacted me and arranged food for me from a restaurant. But there are more people out here who need help. While I was in a restaurant to get a food packet, a migrant labourer came there with four bulbs in exchange for a meal. The restaurant owner gave him food for free out of pity,” he says.

Dr Rajakumaran, who has also authored a few books in Malayalam, points out that despite the difficult times, he is also seeing instances of people extending unconditional help to those in need.

“Before the Indian Embassy officials came out to my help, some restaurant owners had been kind enough to offer meals without any money. In fact, I told the restaurant owner from where the embassy arranged food for me that I would no longer be able to eat there as it was too expensive. I was thinking about finding a cheaper hotel. But, to my surprise, the restaurant owner told me that he was not charging for the food. I was really overwhelmed by his kindness,” shares Dr Rajakumaran.

Though there are voluntary organisations that are working for people from India, Dr Rajakumaran points out that aid is not reaching everyone.

According to reports, two Indian nationals, one each from Kerala and Tamil Nadu, have tested positive for COVID-19 in the Maldives. Both were reportedly working in a store in Male city. 13 Bangladeshi nationals are also found to have contracted the disease.