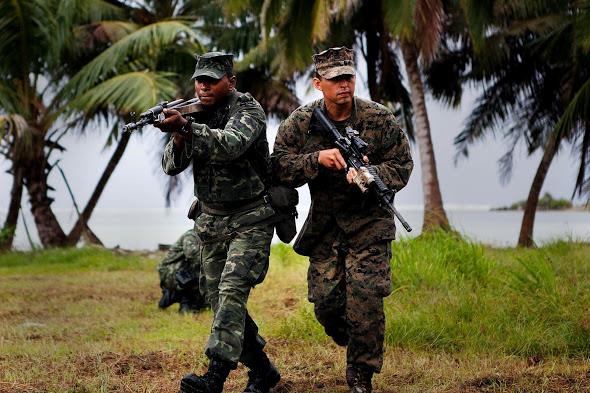 The United States and Maldives earlier this month (10 September) signed an agreement to deepen engagement and cooperation on defence and security.

The agreement came one day after two US allies, India and Japan signed an Acquisition and Cross-Servicing Agreement (ACSA).

Both agreements also came in the backdrop of US Secretary of Defence Dr Mark T. Esper speaking to the President of Sri Lanka and the Prime Minister of Bangladesh on security, defence and COVID-19 related matters.

The renewed emphasis on defence cooperation and improving security relationships in the region comes as Quadrilateral Security Dialog – “The Quad”, composed of the US, Japan, India and Australia are deepening their security cooperation, according to the US think tank RAND.

While the Maldives has a defence agreement in place with India, this new agreement is likely the only other defence-related agreement with a foreign power up to date. How New Delhi views the US – Maldives framework remains to be seen.

“The Framework sets forth both countries’ intent to deepen engagement and cooperation in support of maintaining peace and security in the Indian Ocean, and marks an important step forward in the defence partnership,” the US DoD statement said.

The Maldivian Ministry of Defence took to twitter stating that “Defence and Security Relationship” will add immense value to the excellent #US-#Maldives partnership defined by shared principles & interests in peace & security of #IndoPacific & #IOR amid rising threats like piracy & terrorism.

“DASD Werner and Minister Didi also discussed U.S. support for the Maldives’ response to COVID-19 and areas for future cooperation and agreed to work toward scheduling the first Defence and Security Dialogue. Both sides reiterated their commitment to a free and open Indo-Pacific that promotes the security and prosperity of all nations in the region.” the US DoD said.

The Maldivian Minister of Defence, Mariya Didi called the agreement an “as an important milestone in Defence & Security cooperation between the US.

“We see this as an important milestone in Defence & Security cooperation between the US @DeptofDefense and #Maldives @MoDmv @MNDF_Official” Didi tweeted.

‘The agreement establishes a framework such as the settlement procedures for the reciprocal provision of supplies and services between the Self-Defense Forces of Japan and the Indian armed forces,’ Japan’s foreign ministry said in a statement.

The signing of the US – Maldives framework also came as the Maldivian National Defence Force (MNDF) completed a training exercise termed “Flash Metal” with members from the US Special Operations Command. The Maldives have defence and security agreements with several countries including India.

The Maldives recently reoriented their relationship with India after a turbulent period. In 2018 strained ties between the two nations saw the role of Indian support personnel (for and Search and Rescue Helicopter gifted by India) being questioned.

For a brief period, Maldives indicated that they wanted two Dhruv helicopters and nearly 50 Indian personnel to return home. However, with the change of government in Male, the matter was resolved.

The agreement between Japan’s Self-Defense Forces (JSDF) and Indian armed forces was signed by Japanese ambassador Satoshi Suzuki and Indian defence secretary Ajay Kumar in New Delhi on 9 September. The Indo-Japanese agreement may open the door in future for JSDF units to use facilities in the Andaman Islands or for Indian forces to make use of Japanese bases in Djibouti.

The United States has been trying to get Sri Lanka to enter into a Status of Forces Agreement (SOFA). In 2019, the proposed SOFA caused an outcry in Sri Lanka, with the then opposition calling for it to be scrapped. The present SLPP led government has not yet indicated a willingness to reconsider the SOFA agreement.

The US, India, Japan and recently Australia has made strategic moves to face the growing influence and assertiveness of China in the Pacific and Indian Ocean regions. Countries like the Philippines, Vietnam and Malaysia have taken steps to be more assertive of their maritime claims and take steps to strengthen security relationships with the US and her allies, India and Japan. The US continues to market the “Indo-Pacific” idea to rally support for their efforts.

However, not all is going in the way of the US and the ‘Quad’. Thailand has deepened her military relationship with China. The Royal Thai forces are purchasing Armoured Fighting Vehicles (AFV) and other amphibious vehicles in numbers from China, while the proposed acquisition of two Chinese built submarines has caused an uproar in the country.

Myanmar, Cambodia and Laos remain close friends of China with strong military ties. Russia is also flexing her capabilities in the Indian Ocean and the Pacific. As the Russian Pacific fleet expands and modernizes it will become more of a concern for the US and Quad. Russia is also seeking basing options in the region. While South East Asian countries may side with the US to some degree, how far they are willing to go with the US in containing an assertive China remains to be tested.

However, Sri Lanka needs to clearly define her medium to long term national objectives in order to chart her foreign policy in terms of security and economic revival in the coming years.