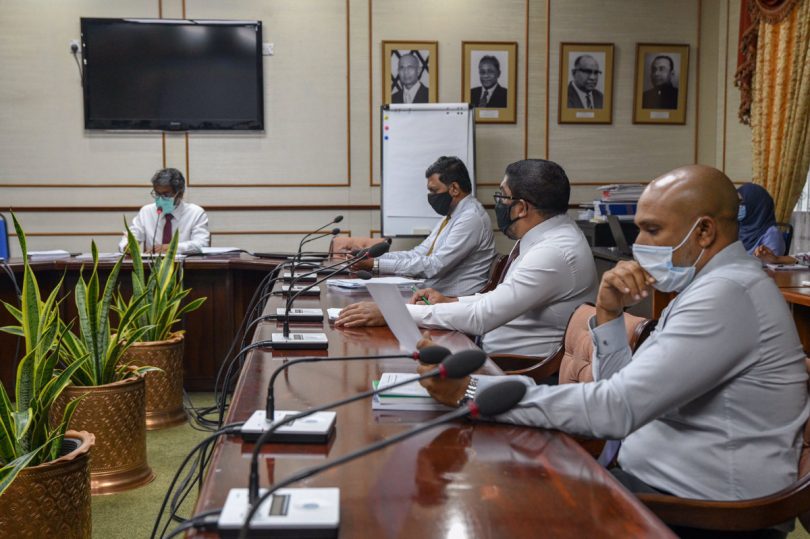 The Human Rights and Gender Committee of the People’s Majlis has decided to seek a statement from the victim in the groping case onboard a safari which surfaced over the past weekend, with her consent.

The case was placed on the agenda for Monday’s committee meeting, where members submitted five key proposals.

As such, committee members stressed on the importance of seeking a statement from the victim for their reference, at a time controversy has sparked among the public regarding the case, with several news outlets reporting in controversial manners that pave way for the victim to be further victimized.

Speaking during the meeting, north-Maafannu constituency MP Imthiyaz Fahmy noted that it is important to seek the details of police’s actions in connection to the case.

Highlighting that the Prosecutor General has an important role to ensure the investigations proceed impartially, MP Imthiyaz noted that they must ensure the PG duly upholds his legislative responsibilities.

Committee members seconded the lawmaker’s proposal, having unanimously approved to hold discussions and seek out the findings of the PG regarding police actions in the case.

The committee also decided to summon the officer who arrived at the scene alongside the Station In-charge during Tuesday’s meeting.

Further, members passed to seek information from the Ministry of Gender Family and Social Services, on whether the victim was provided the required security and support.

Lastly, committee members highlighted that different news outlets are citing the victim, in different manners and reporting in manners that subject the victim to blame and difficulties. This will be brought to the attention of the Maldives Media Council and Broadcasting Commission of the Maldives, according to a proposal submitted during Monday’s meeting.

In total, the committee passed to:

Since it surfaced over the past weekend, the safari sexual assault case has churned public outcry, at a time the authorities have released the two 39-year-old Maldivian men accused of sexually assaulting the 27-year-old foreign woman, a worker residing in the Maldives.

Some have expressed concern over possible political influence over the matter, which the Speaker and Former President Mohamed Nasheed has urged to neglect.