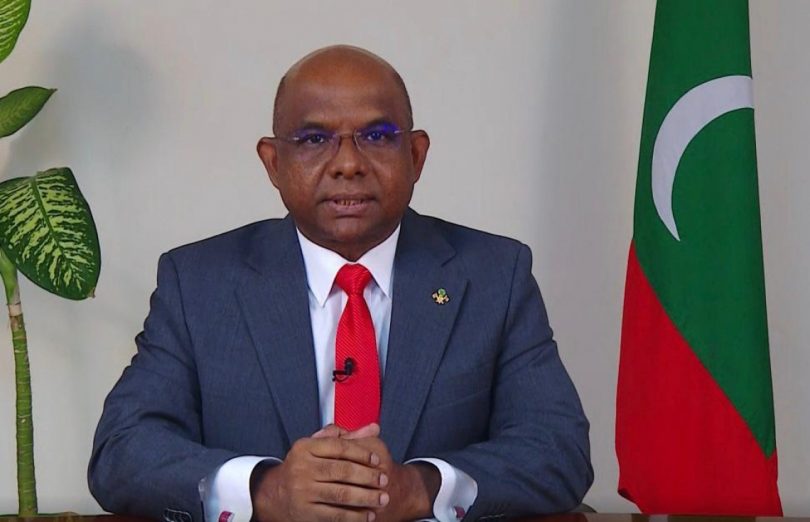 Minister of Foreign Affairs Abdulla Shahid, on Thursday, urged for the restoration of flights between Maldives and China, following disruptions caused by the ongoing COVID-19 pandemic.

The foreign minister expressed the sentiment in a video message sent to the Virtual Reception held to celebrate China’s upcoming 71st National Day.

Encouraging renewed travel links, trade and people to contact between the citizens of both countries at the earliest possible opportunity, Minister Shahid affirmed that increasing the number of tourist arrivals was Maldives’ highest priority in terms of economic recovery.

China is one of the largest source markets for Maldives’ tourism industry, with a total of 284,029 Chinese holidaymakers arriving in the country during 2019, representing the highest number of tourist arrivals from a single country.

During the video message, Minister Shahid congratulated China on behalf of President Ibrahim Mohamed Solih, the Maldivian government and the country’s citizens.

The foreign minister went on to commend China on the accomplishment of extraordinary development and economic milestones following its founding in 1949.

Noting that the country continued to demonstrate leadership in crucial global areas including public health, Minister Shahid applauded the Chinese government for the targeted measures taken to curb the ongoing COVID-19 pandemic. He particularly expressed optimism regarding the vaccines currently under development by Chinese pharmaceutical companies.

Highlighting that 2020 marked 48 years of official diplomatic relations between Maldives and China, Minister Shahid asserted that bilateral ties were based on strong historic bonds, sovereign equality and mutual respect for territorial integrity. He also reiterated the incumbent government’s commitment to the One-China Policy.

China annually celebrates National Day on October 1, in commemoration of the formal establishment of the People’s Republic of China by Mao Zedong in 1949.