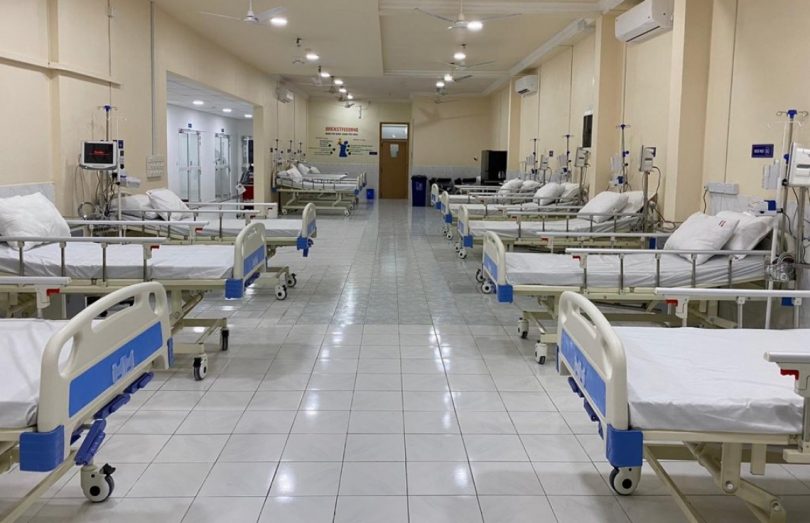 Speaking in a virtual ceremony held for the inauguration, Deputy Director General at the Ministry of Health Nayaaz Ahmed stated that treatment for COVID-19 has been extended to the atolls with the opening of these facilities.

Prior to this, health facilities for virus patients were only established in capital Male’.

According to Nayaaz, both the newly opened facilities in Shaviyani Atoll and Baa Atoll come with 20 Intensive Care Unit (ICU) beds and 37 isolation beds, each.

“The facilities inaugurated today will provide ease of access to people living in northern islands who will no longer have to travel to Male’ for COVID-19 treatment”, Nayaz said.

Moreover, he added that similar facilities will roll out their services at Gan in Laamu Atoll, Vilingili in Gaafu Dhaalu Atoll and Hithadhoo in Addu Atoll, during the upcoming week.

Special Guest at the ceremony, Minister of National Planning, Housing and Infrastructure Mohamed Aslam spoke of how Maldives was a leading example in handling COVID-19 patients and isolating their contacts.

“Even in the most developed countries, people who test positive are isolated in their own homes. They also do not quarantine primary contacts in a separate place. Usually in other countries, patients are only moved when they fall sick and need to be transferred to the hospital”.

As a result of the measures taken in the Maldives, Aslam stated that the number of infected patients and fatalities recorded in the island nation are much lower compared to the initial estimates.

Moreover, Aslam noted that the government initiated plans to provide treatment for COVID-19 in the atolls before a community spread was recorded in the country.

The planning minister commended the role played by women in Maldives’ COVID-19 response, highlighting that 90 per cent of the health professionals involved in the contact tracing process were women and the number of female volunteer doctors was also higher than males.

Aslam also emphasised that the number of locals identified as COVID-19 patients was, on average, at 34 per cent, but expressed concern that this number had now increased to between 70 per cent and 98 per cent, with the ease in lockdown measures.

Therefore, he advised the public to be more mindful in their day-to-day lives.

“If we are careless, the virus will not let up. We will have to suffer the consequences. It is of utmost importance to listen to the advice of doctors. Until a vaccine is created and a cure is found, we need to live according to the doctors’ advice”, Aslam said.

Noting that most individuals who test positive in the country do not develop complications, he stated that many cases can be managed at Atoll levels.

However, he asked authorities to conduct testing carefully, be mindful to the number of available test kits, and test only those who need to be tested.

Since transferring some patients to Male’ City for treatment is difficult under certain circumstances, Indira Gandhi Memorial Hospital (IGMH)’s Respiratory Specialist Dr Moosa Hussain said that the opening of the new facilities will solve this issue as well.

“Not everyone can be brought to Male’ because of high oxygen demand and difficulty in travel”, he said, “… even transport within Male’ is difficult for us due to the patient’s condition”.

Moosa further added that health personnel working at the new facilities will conduct daily discussions with the doctors in Male’.

The first facility established for COVID-19 treatment in Maldives’ began operations in Hulhumale’ on June 7. According to IGMH, tasked with running the facility, only a few vacant beds remain in the Hulhuamale’ Medical Facility with a capacity of treating 300 patients.

The need for medical facilities is increasing with the recent spike in COVID-19 cases in the Maldives. After recording low numbers for several weeks, the recent spike of virus cases has reduced the total amount of recovered patients from 86 to 80 per cent.

The number of COVID-19 cases increased after the state initiated efforts to steer the country towards a ‘new normal’ with the phased easing of lockdown restrictions across the Greater Male’ Region. Government offices and businesses including shops, cafe’s and restaurants restarted services on July 1 while authorities reopened Maldives’ borders for tourism on July 15.

On March 12, WHO classified the spread of COVID-19 as a global pandemic. To date, the new strain of novel coronavirus has infected over 13.9 million people and claimed over 593,000 lives around the world. However, out of those infected, more than 8.2 million people have recovered.