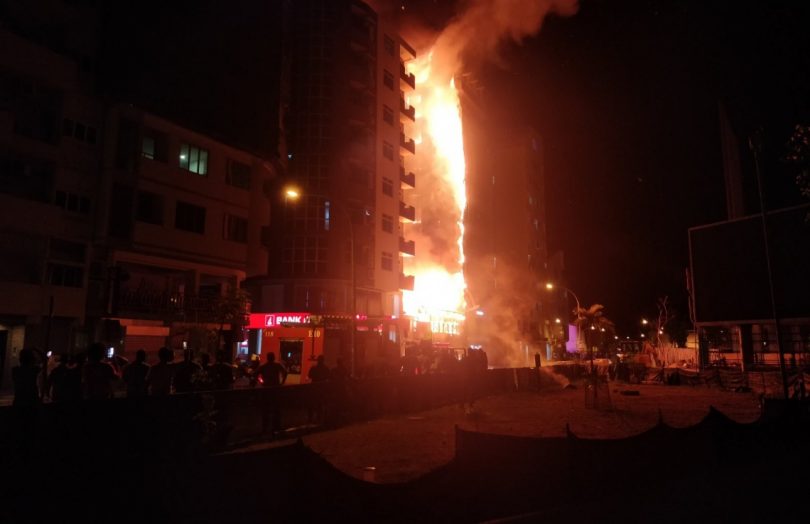 A fire broke out in a building in capital Male’ City’s Henveiru Ward on Friday night.

The blaze, which erupted on Boduthakurufaanu Magu, next to where Bank of Maldives’ ATMs is located, is burning strongly.

Maldives National Defence Force (MNDF)’s Fire and Rescue Service is currently on the scene, attempting to control the fire.

MNDF stated that military personnel have now evacuated all the residences in the area. No injuries have been reported thus far.

Video footage posted by an individual on the scene.

According to local media Mihaaru, the burning building is where well-known Italiano cafe’ was formerly operated.

Mihaaru further stated that the fire has spread to the top floors of the ten-storey adjacent building where State Bank of India (SBI) is located, reportedly due to the steel cladding outside the building.

The fire has engulfed the penthouse of the building but reports state that the floor was unoccupied.

The building where the fire originated is was completely burned through. Reporters on scene stated that the blaze reignited after Fire and Rescue Service extinguished the fire.

Health Protection Agency (HPA) advised against gathering to the scene of fire to avoid smoke inhalation and requested those living in the surrounding area to keep their doors and windows closed.

The fire spread to more floors of Gadhagey Mohamedfulhu Building, where SBI, one of the largest banks in Maldives, is located.

Reporters on scene described that the blaze was slowly being controlled with the joint efforts of MACL and MNDF’s firefighters. However, the fire was still burning at the Gadhagey Mohamedfulhu Building and the cafe’ where the blaze erupted.

MNDF stated that the spread of fire was controlled but attempts were still underway to completely stifle the blaze Authorities confirmed that no injuries were reported.

State Bank of India (SBI) stated that no floors related to banking services were damaged in the fire. Therefore, the bank noted that services will be provided on Sunday, as usual.

Despite the affecets of the fire, SBI said that disaster backup is available.

SBI occupies five floors of Gadhagey Mohamedfulhu Building, of which the lowest three storeys, including the ground floor, are used for customer services.

Defence Minister Mariya revealed that the fire was initially reported around 2145hrs. She told local media PSM that that there was a delay in accessing the top floors of Gadhagey Mohamedfulhu Building due to high security.

Authorities confirmed that 85 percent of the fire was controlled.

MNDF revealed that auhtorities were inspecting the floors of the building and assessing the damages. They confirmed that no individuals were present inside the building at the time of the fire.