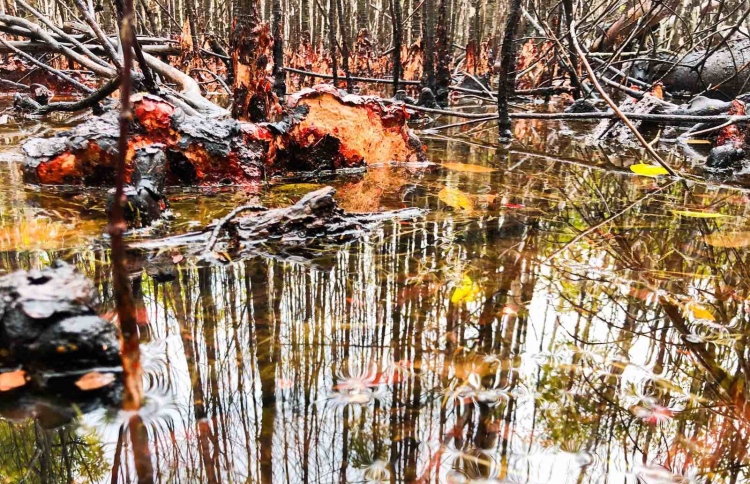 The island council of Neykurendhoo, Haa Dhaalu Atoll, commenced a survey on Friday to find the root cause behind the ongoing decay of the island’s wetlands, which was declared a protected area by the state in late 2018.

Funded by the island council and the Human Ecology Council of the Commonwealth, the survey is being carried out according to the Health Protection Agency’s (HPA) guidelines, in collaboration with environment NGO Save Maldives, International Union for Conservation of Nature’s Mangrove Specialist Group (IUCN MSG), and the Mangrove Action Project (MAP).

Prior to launching the survey, the council also held a meeting with the island’s residents to discuss plans to reach the bottom of the unexplainable phenomenon laying waste to the wetlands.

Residents of the island are actively taking part in the survey, assisting experts in the collection of samples and data.

The survey will mainly focus on the changes noticed in the biotic and abiotic factors of the wetlands.

The entire wetland is estimated to cover an area of 28.3ha; 16.7% of the whole island. Two separate water bodies can be found within the wetland area in Neykurendhoo, from which estimated 5ha; have died. @SaveMaldivesMV #SaveThiladhunmathiMangroves #SaveNeykurendhooKandoofa pic.twitter.com/k1cVqrOv51

According to Save Maldives, a special report will be prepared on the findings of the survey and submitted to relevant authorities for further action.

Referring to the report, Save Maldives will urge the authorities to save the wetlands, revive the decomposed part of the mangrove, and take measures to protect the area.

In addition to Neykurendhoo, other islands in the north, including Kelaa in Haa Alif Atoll, Kanditheem in Shaviyani Atoll and Kendhikulhudhoo in Noonu Atoll, have also reported that decay in their wetlands.

However, so far, no action has been taken to mitigate the decomposition of these mangroves.