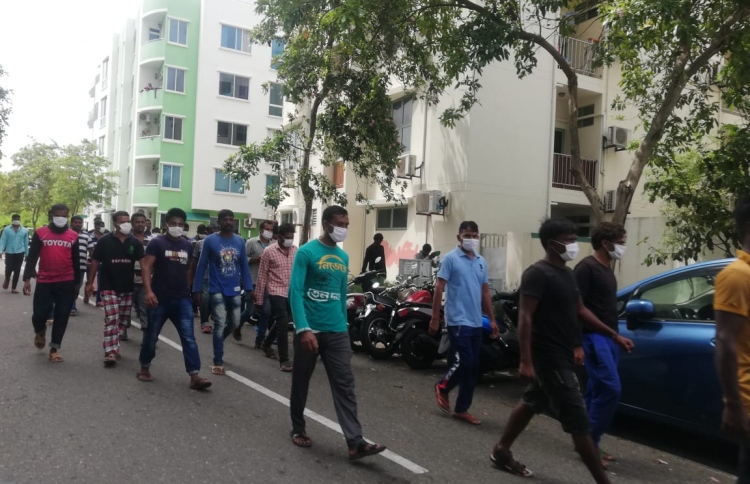 The foreigners were recruited to construct flats, presently being built in the reclaimed suburb of Hulhumale, for Maldives Police Service (MPS) and Maldives National Defence Force (MNDF) personnel.

On Sunday, approximately 80 workers met with the heads of the company to discuss a solution for the issue. Local media Mihaaru reported that both parties agreed to reach final decision latest by July 10.

According to media reports, the protest took place after the aforementioned deal was made between the employers and workers.

Video footage of the protests shows certain workers causing damage to the building as well as to the equipment on site. Clashes were also observed between the ex-pats and police officers as security forces attempted to control the situation.

However, police have stated that the demonstration was dispersed peacefully by negotiation, although some videos in circulation across social media channels seemingly depict officers using force to push the protesters back.

The foreign workers previously staged a protest on June 25, over not failure to pay their agreed-upon wages.

Two years prior, in April 2018, the company’s employees protested over similar remuneration issues. At the time, workers claimed that the company had failed to pay as much as three months’ worth of salary.

Workers in Bodufinolhu claimed their actions were ignited by employers having subjected them to several months of work without pay.

Construction work for the flats allocated for MPS and MNDF staff commenced in 2012, during former President Mohamed Waheed’s administration, but are yet to conclude.

Speaking during his presidential campaign on August 11, 2018, incumbent President Ibrahim Mohamed Solih assured that keys to the apartment would be handed over to the respective tenants within a year.

“Advance payment for two years has been deducted from [Police and MNDF personnel’s] salaries. [Yet] None of their families have been able to move in [to the flats]”, acknowledged President Solih, the then-presidential candidate.

These expat-led demonstrations take place amid renewed concerns from rights groups as well as the general public, over the continued exploitation of expatriate workers in the Maldives.

Violations reported include that of including human trafficking, withholding of wages, poor living conditions, and other human rights violations. Further, the aforementioned low quality of life has cemented the disproportionate effect had by Maldives’ ongoing COVID19 outbreak on its vast migrant population.