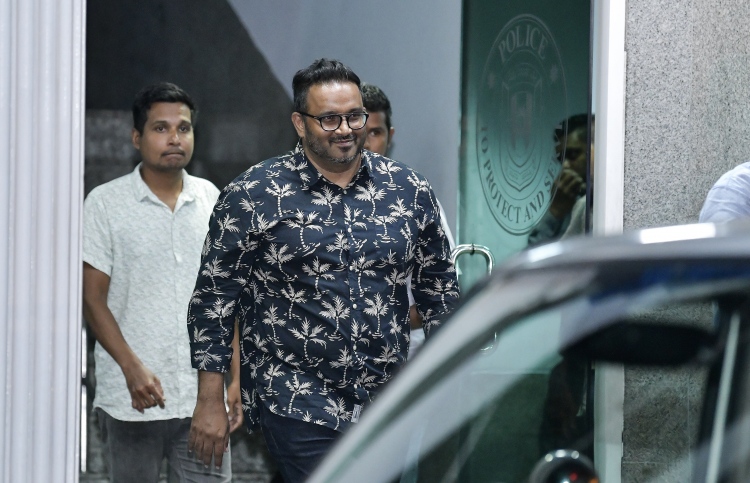 The Criminal Court, on Tuesday, implemented a travel ban on former Vice President Ahmed Adeeb after dropping all criminal charges against him.

The state pressed a total of seven charges against Adeeb over Maldives Marketing and Public Relations Corporation (MMPRC)’s embezzlement scandal, worth over MVR 1.3 billion.

Following the verdict, Adeeb, who was confined to house arrest until the conclusion of his trial, is now a free man. There are currently no ongoing cases against the former Vice President at any courts.

Both Maldives Police Service and the Prosecutor General’s Office requested the ex-VP’s passport to be withheld.

The MDP Chairperson’s motion highlighted that the court had ruled to drop the charges on its own initiative without Adeeb having requested such action. Furthermore, the Criminal Court’s decision to block further pursual of Adeeb’s case was described as illegal.

Noting that allegations of corruption, bribery and undue influence were involved in the case, MP Latheef also expressed his intention of lodging a case against Criminal Court Judge Ismail Rasheed with the Judicial Service Commission (JSC) as well as urging the government to appeal the case.

The Prosecutor General has appealed the Criminal Court’s decision at the High Court, asserting that the verdict was in violation of the Criminal Procedure Act.

In a press conference held Tuesday, PG Hussain Shameem declared that given the documentary evidence gathered against Adeeb, irrespective of his confessional statement, PG Office could potentially charge the former vice president with over 150 separate charges that could land him over 800 years in prison.

The Criminal Court decided against pursuing Adeeb’s charges on the basis that the state had “wrongfully” entered a confessional agreement with the former VP.

During his latest hearing, Adeeb claimed that he had signed the agreement in July 2020 in order to attain permission to go abroad for medical treatment.

Criminal Court Judge Ismail Rasheed noted that every detainee had the right to medical care and asserted that demanding a confession for certain crimes in return for medical treatment could be considered an act of torture.

In addition to stating that the acceptance of confessions acquired through coercion was forbidden as per the constitution, the judge also noted that there was no guarantee that the police re-investigated the MMPRC case exempt from influence. He added that the state had pressed charges against Adeeb after the statute of limitations listed in the Criminal Procedure Code had passed.

In 2016, during former President Abdulla Yameen Abdul Gayoom’s administration, Adeeb was sentenced to 33 years in jail over his involvement in the MMPRC graft, for orchestrating an assassination attempt on President Yameen, and weapons possession.

However, Adeeb’s charges were later dropped following the change of administration in November 2019.

The Criminal Court sentenced the ex-president to five years of imprisonment and imposed a fine of USD 5 million over money laundering charges in 2019.