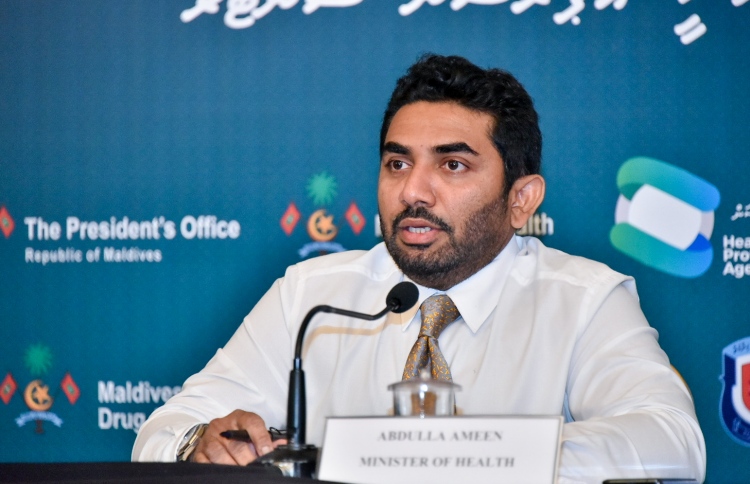 Speaker of Parliament Mohamed Nasheed, on Wednesday, requested that the Committee on Member’s Privileges and Ethics investigate discrepancies present between Minister of Health Abdulla Ameen’s statements delivered to the Parliament and the information compiled by the Auditor General’s Office in their relevant audit report, published on August 16.

Nasheed kicked off Wednesday’s Parliament session by narrating Ameen’s statements word-for-word, and requesting the Secretary-General to read parts of the audit report, deemed relevant to the matter.

Speaking at an earlier parliamentary session, the health minister stated that the procurement of 75 ventilators was handed over to Dubai company Executors General Trading LLC on the recommendation of the World Health Organisation (WHO).

However, the compliance audit report, on the health ministry’s spending of state funds over the COVID-19 response, disclosed that WHO had not informed health ministry to procure ventilators from Executors General Trading.

Noting glaring inconsistencies present between the audit report, Auditor General Hassan Ziyath’s statements and Ameen’s own, the Speaker concluded that the health minister was in contempt of Parliament.

Auditor General Ziyath, on Tuesday, told the Parliamentary Committee on Public Accounts that the Dubai company was chosen for the ventilator deal after discussions between Ameen and Dr Arvind Mathur, WHO representative to the Maldives.

However, he stressed that no official exchanges took place between WHO and health ministry regarding such a matter.

President Ibrahim Mohamed Solih has lodged the violations noted in the audit report at Maldives Police Service and the Anti Corruption Commission (ACC). The two institutions will conduct a joint investigation into the case.

Spokesperson Hood had, on Sunday, assured that the government will not hesitate to take action against individuals responsible “regardless of those involved,” once the final compliance report is officially submitted.

Following the uproar caused by the ventilator controversy, Ameen recused himself from his ministerial duties until the conclusion of the investigations into the matter. The health ministry is currently being temporarily spearheaded by the Minister of National Planning, Housing and Infrastructure Mohamed Aslam.