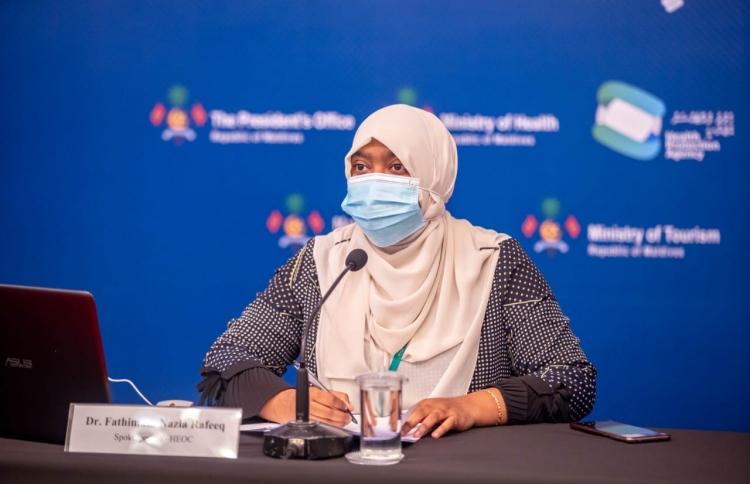 Health Emergency Operations Centre, on Wednesday, revealed that efforts were underway to increase the COVID-19 diagnostic capacity, across the island nation.

Speaking at the regularly held press conference, HEOC spokesperson and Health Protection Agency (HPA)’s Senior Medical Officer Dr Nazla Rafeeq, stated that a total of 124,966 samples were tested since February. She further noted that the country has since drastically increased the diagnostic capabilities.

Dr Nazla also revealed that the Hulhumale’ Hospital in the reclaimed suburb had recently commenced testing for the virus.

HEOC stated that, with the assistance of the World Health Organization (WHO), the government is preparing to expand COVID-19 testing on the islands of Villingili in Gaafu Alif Atoll, Funadhoo in Shaviyani Atoll and Naifaru in Lhaviyani Atoll, by placing GeneXpert machines on the islands.

Dr Nazla claimed that a supply of over 45,000 test kits was currently in stock and under the care of the health ministry.

Moreover, she asserted that the government has planned to commence COVID-19 testing at the Maldives Drug and Food Authority, by the end of September.

In addition to the Greater Male’ region, active virus cases are currently present in 25 inhabited islands as well as 21 resorts across the archipelago.

During the last month, authorities tightened the safety measures implemented in the Greater Male’ region, following an alarming upsurge of COVID-19 cases after the state initiated efforts to steer the country towards a ‘new normal’ with the phased easing of lockdown restrictions.

Authorities have stated that the effects of implementing stricter measures will be reflected in the case numbers towards the end of the month.